The White House announced that Ukraine would receive $53 million in new aid, including $46 million for military equipment 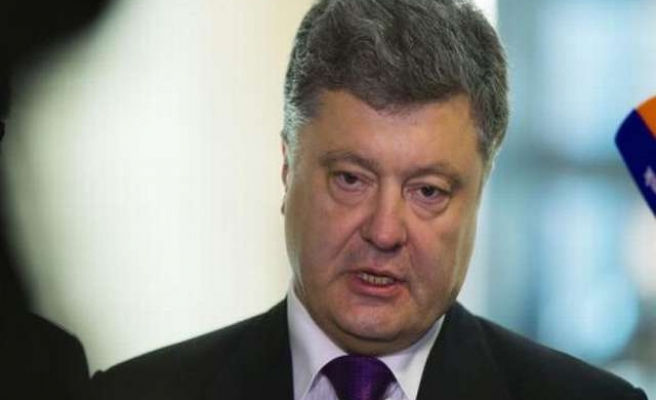 Ukraine President Petro Poroshenko secured $53 million in assistance from the United States on Thursday but President Barack Obama for now turned down his appeals for weapons to fight Russian-backed separatists.

Images of Poroshenko sitting side by side with Obama in the Oval Office and of the warm reception he received in a speech to Congress projected a symbolic show of solidarity with the Ukraine leader as he faces down Russia's incursion.

The White House announced that Ukraine would receive $53 million in new aid, including $46 million for military equipment such as counter-mortar detection units, body armor, binoculars, small boats and other gear for Ukraine's security forces and border guards in the east.

Poroshenko used a speech to members of the U.S. Senate and House of Representatives to appeal for lethal aid.

"Please understand me correctly. Blankets, night-vision goggles are also important. But one cannot win the war with blankets." He added: "Even more, we cannot keep the peace with a blanket."

At the White House, Poroshenko told reporters after his talks with Obama that he was satisfied with the level of cooperation.

"I asked the president to increase the cooperation in security and defense sector, and I received a positive answer," he said.

NATO, wary of being drawn into a proxy conflict with Russia in the east European state, has decided against sending arms to Ukraine, which has frequently been outgunned by Russian-supported separatists in the eastern border areas.

A senior Obama administration official, asked why the United States opposes providing lethal aid, said Washington believed Ukraine had enough such equipment and that the types of weaponry that has been discussed would be of only marginal value.

"There's no sense that there's an effective military edge that could be given that could change the overall balance," the official said. "Ukraine would be extremely vulnerable to a fully supported Russian attack."

In his talks with Poroshenko, Obama emphasized a diplomatic outcome in Ukraine. The United States and its European allies have imposed several rounds of economic sanctions against Russia for its seizure of Crimea and incursion into eastern Ukraine.

"We are prepared to support Ukraine in negotiations with Russia in order to make sure that the Ukrainian people can enjoy the kind of freedom and prosperity that is their right," Obama said.

In his speech to U.S. lawmakers, Poroshenko put the struggle in Ukraine in historical terms, calling it "the most heroic story of the last decade."

"The outcome of today's war will determine whether we will be forced to accept the reality of a dark, torn and bitter Europe as part of a new world order," Poroshenko said.