Ukrainian Interior Minister Arsen Avakov wrote on his Facebook page : “Lenin? Let him fall down. As long as nobody suffers under his weight. As long as this bloody Communist idol does not take more victims with it when it goes.” 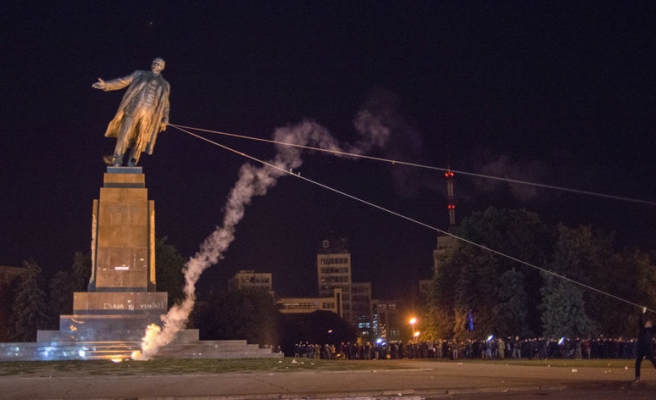 Anti-Russian protesters in Ukraine’s Kharkiv pulled down a massive statue of Vladimir Lenin late Sunday chanting “glory to Ukraine” in a symbolic rejection of Russian influence over the war-torn nations.

Many Lenin statues were brought down in Kiev and the pro-European western Ukraine following the ousting of former pro-Russian president Viktor Yanukovich in February, but the pulling down of this statue in Ukraine's second biggest city was the first of its kind in eastern Ukraine, which is rife with pro-Russian separatists.

Regarding the pulling down of the statue, which has stood in the city as a symbol of Ukraine's Soviet era that came to an end in 1991, Ukrainian Interior Minister Arsen Avakov wrote on his Facebook page : “Lenin? Let him fall down. As long as nobody suffers under his weight. As long as this bloody Communist idol does not take more victims with it when it goes.”

Pro-Russian protesters had blocked previous attempts by to pull down the 50-year-old, 28 feet tall statue in Kharkiv’s Freedom Square, in what is considered to be the most vulnerable cities in the east if the rebellion were to spread.

However, according to the Washington Post, Kharkiv Mayor Gennady Kernes on his website vowed on Monday to rebuild what was Ukraine's tallest Soviet-era monument, saying that it had been “barbarically destroyed.”

Tensions are high between Moscow and Kiev over the separatist rebellion in eastern Ukraine, in which the Ukrainian authorities accuse Russia of directly backing armed rebel fighters, and over Russia's annexation of the Crimea peninsula.

Moscow denies supporting the rebels militarily and is wary of Kiev's moves to deepen ties with the EU. Russia has had sanctions imposed on it by the EU and the United States over its role in the Ukraine crisis.

Despite a cease-fire between Kiev and pro-Russian rebels drawn up in a September 5 summit in the Belarusian capital of Minsk, the separatists have organized frequent attacks in eastern Ukraine.

At least 50 pro-Russian separatists and seven Ukraine soldiers were reportedly killed on Monday in ongoing clashes in the country’s eastern region of Donetsk.