Ukraine rebel commander says will not pull out of Donetsk

Igor Girkin, a Muscovite who has the nom de guerre of Igor Strelkov, has been criticised by some other rebel commanders for withdrawing from Slaviansk last weekend 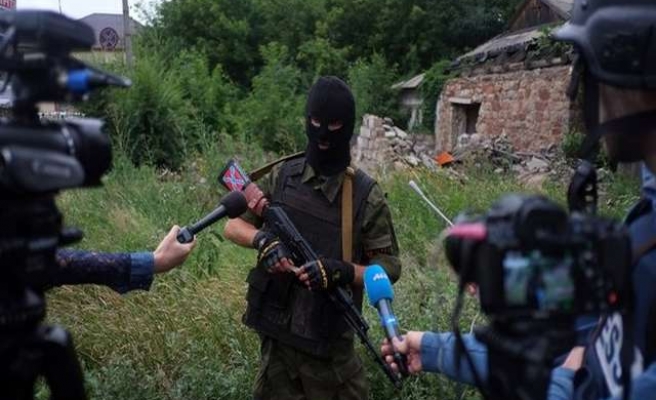 An enigmatic Russian leading separatist rebels in the eastern Ukrainian city of Donetsk made a rare appearance in public on Thursday to say he would not abandon the city though he defended his decision to pull out of the stronghold of Slaviansk.

Igor Girkin, a Muscovite who has the nom de guerre of Igor Strelkov, has been criticised by some other rebel commanders for withdrawing from Slaviansk last weekend and allowing government forces to savour a major victory.

Hundreds of his men headed south to Donetsk, the region's main industrial centre, after the rout and are digging in now in the city of more than 900,000 people as government forces appear to be preparing a blockade to break their resistance.

Asked by a journalist if he would make a similar tactical withdrawal from Donetsk to save people's lives, the reason he gave for quitting Slaviansk, the 43-year-old Strelkov said simply: "No".

Alexander Borodai, the "prime minister" of the self-proclaimed "people's republic" seated alongside him, added: "Where would we go ? We will defend the territory of the Donetsk People's Republic."

Strelkov, who disclosed on Thursday he had been a colonel in Russia's Federal Security Service - the successor agency to the KGB - has been on Ukraine's 'most-wanted' list since he began marshalling rebel forces against the Kiev government in April.

While he commanded forces in Slaviansk, the town became a citadel of fierce resistance and at least two government military helicopters were brought down in the area by rebel fire.

Said to have a penchant for historical battle recreations and enjoying the profile of an elusive adventurer dropping casually in and out of conflict zones, Strelkov began to take on hero status in rebel quarters.

But this reputation has been dented by the Slaviansk withdrawal and retreat to Donetsk in which, Strelkov admitted on Thursday, he lost a tenth of his men.

On Thursday, the moustachioed Strelkov, dressed in combat fatigues with an antiquated pistol strapped to his hip, spoke without emotion as he defended the move in which rebels broke out from a government noose around Slaviansk.

"Militarily, the reason for withdrawal of the garrison from Slaviansk was obvious. My conscience is absolutely clear," he said. "More than 90 percent of the force got out of Slaviansk and safely got to Donetsk."

The need to justify the withdrawal from Slaviansk may have been his main reason for appearing before representatives of the world's media on Thursday.

He gave few details about his past though he said he left Russia's FSB service with the rank of colonel.

But he said he had battlefield experience as a volunteer fighter in Moldova's rebel enclave of Transdniestria and in Bosnia. He had also fought, he said, in Russia's former rebellious region of Chechnya.

He said he had been specifically asked to lead the separatist rebellion in Ukraine's Russian-speaking east - but would not say by whom specifically.

"I was asked to help in organising a force, to lead a group which was ready to rise up in rebellion," he said, saying only that the approach had come from people with whom he had been serving with in Crimea which Russia annexed from Ukraine in March.

"They considered I could do this successfully, more successfully than they could, and I agreed to their proposal and so I came to the territory of Ukraine," he said.