Kiev says the rebels have launched attacks on villages near Mariupol, a port of 500,000 people, and fears that could be the next separatist target. 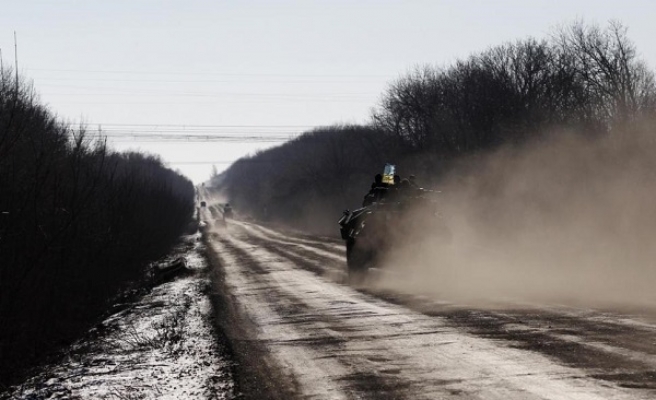 Pro-Russia separatists said on Tuesday they had begun pulling heavy weapons from the front line in east Ukraine under a ceasefire deal, but Ukraine said the rebels were using the cover of the truce to reinforce for another advance.

Fighting has eased in eastern Ukraine in recent days, raising hope that a ceasefire due to start on Feb. 15 can finally take effect after the rebels initially ignored it to storm a government-held town last week.

Since taking the railway hub of Debaltseve in one of the worst defeats for Kiev of the war, the Moscow-backed rebels have indicated they want the truce to take effect. But Kiev says the rebels are still shooting, which the rebels deny.

Western countries have not given up on the ceasefire deal to end fighting that has killed more than 5,600 people, but have made clear they are suspicious of the rebels and their presumed patron, Russian President Vladimir Putin.

European countries have warned of new economic sanctions against Moscow if the rebels advance deeper into territory the Kremlin calls "New Russia". Washington says it could arm Kiev.

"Today at 9 in the morning (0600 GMT) the planned withdrawal of heavy equipment started," rebel commanderEduard Basurin told Reuters. "We're pulling it back 50 km (30 miles) from the boundary line ... Of course we won't say exactly where we're pulling it back to."

Basurin denied Ukrainian military reports of fighting in southeast Ukraine, saying there had been "provocations" from the government side but no serious clashes.

But the Kiev military said in a statement that rebel assertions they were pulling back guns were "mere empty words".

"On the contrary, the terrorist groups, making use of the ceasefire period, are reinforcing their units and building up ammunition."

It said one of its soldiers had been killed and seven wounded in the past 24 hours, and repeated that it would not start pulling back weapons until shooting stopped.

"As soon as the fighters implement the ceasefire for two full days, that is the sole signal to start the withdrawal," military spokesman Andriy Lysenko said in a briefing, noting however that fighting had diminished.

Kiev and its Western allies say the rebels are funded and armed by Moscow, and backed by Russian military units on the ground. Moscow denies aiding sympathisers in Ukraine, and says the heavily armed Russian-speaking troops operating without insignia there are not its men.

Putin, who has mainly struck a conciliatory tone since the rebels captured Debaltseve last week, said in an interview with state television he did not think Russia and Ukraine would go to war against each other.

"I think that such an apocalyptic scenario is unlikely and I hope this will never happen," he said. He said he saw no need for another meeting with the leaders of France, Germany and Ukraine like the one that produced the truce deal.

Kiev says the rebels have launched attacks on villages near Mariupol, a port of 500,000 people, and fears that could be the next separatist target.

"There's been quite intense shelling since the morning. The situation is tense but under control," Dmytro Chaly, spokesman for the Ukrainian military in Mariupol, said on television channel 112.

A feud over natural gas, which appeared to have been settled for the winter by an agreement late last year, has also resurfaced.

Kiev has accused Moscow of failing to deliver gas it paid for in advance under the deal; Russia said on Tuesday thatUkraine had paid in advance for only two more days of supply, after which it could be cut off.

The dispute dates back to last week when Kiev cut back gas to rebel-held areas. Moscow replied by supplying the rebel areas directly and suggesting it would bill those shipments to Kiev's account. Kiev says it will not pay for gas supplied to the rebel areas without its permission, through pipes outside its control.

Russia is the biggest supplier of natural gas to Europe, and much of that transits Ukraine. Gas disputes between the two countries have hurt European supplies in past winters during peak demand, although last year Russia cut off gas to Ukraine for six mostly warm months without hitting European flows.

The EU said it was not worried about supplies: "At the moment, gas flows to the EU are normal and we expect that the gas transit to the EU will not be affected," European Commission spokeswoman Anna-Kaisa Itkonen told reporters.