Government blames ultra-nationalists for the unrest, saying they detonated a live grenade near the entrance to the parliament building 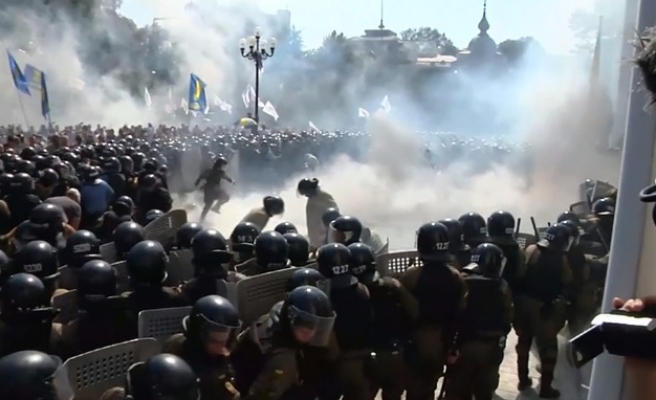 Ukraine was on Tuesday reeling after fierce clashes in Kyiv killed two policemen and wounded 140 people outside parliament as tensions flared over controversial legislation giving more autonomy to Moscow-backed rebels.

It was the worst unrest in the Ukrainian capital since a bloody uprising ousted Moscow-backed president Viktor Yanukovych in early 2014, unleashing a separatist insurgency in the industrial east.

The clashes erupted on Monday when hundreds gathered outside the parliament to protest after legislators gave initial backing to a bill granting a degree of autonomy to Kremlin-backed rebels in eastern Ukraine.

The government blamed ultra-nationalists for the unrest, saying they detonated a live grenade near the entrance to the parliament building.

The chaotic scenes with swirling black smoke and baseball bat-wielding protesters carried echoes of the worst clashes of the Maidan uprising that ousted the Kremlin-backed president early last year.

"We have already found the perpetrators," pro-Western President Petro Poroshenko said in a televised interview on Tuesday.

"The organisers, who were distributing baseball bats, who helped bring weapons, will also be found."

Poroshenko, who was to visit the wounded later on Tuesday, branded the violence a "stab in the back" saying the perpetrators deserved "severe" punishment.

A member of the National Guard died on the operating table Monday, killed when a grenade fragment reached his heart.

On Tuesday, a second member of the National Guard succumbed to injuries caused by shrapnel from the grenade, Interior Minister Arsen Avakov wrote on Twitter.

More than 140 people were being treated in hospital, officials said.

"According to our latest data, 141 injured people remain in hospitals all over Kyiv," police spokeswoman Oksana Blyshchyk told AFP.

She said 131 of the wounded were policemen and 10 of them were in a serious condition.

Authorities pointed the finger at activists from the ultra-nationalist Svoboda (Freedom) party, but they denied responsibility.

Kyiv police said a number of politicians suspected of organising the clashes, including the firebrand Svoboda leader Oleg Tiagnybok, would be questioned.

But the party rejected the accusations, blaming the authorities for the violence and accusing them of being the first to use force against demonstrators.

Kyiv police said 18 people, including a member of Svoboda's paramilitary wing accused of firing the grenade, were still in detention.

The clashes came as a shock to Ukrainians who have been struggling with the pro-Russian insurgency in the east.

"At a time when Russia and its bandits are seeking to destroy the country but are unable to do this on the front line, the so-called pro-Ukrainian political forces are trying to open a second front inside the country," said Prime Minister Arseniy Yatsenyuk.

Washington, Brussels, Moscow, London and Paris all expressed their concern over the violence.

The bill on increased autonomy for the ex-Soviet country's regions has sparked heated debate in Ukraine where opponents see it as an attempt to legalise the seizure by Russian-backed rebels of the eastern Donetsk and Lugansk regions.

The second reading of the legislation is expected by the end of the year. It will need a two-thirds majority of 450 lawmakers to pass that stage.

Kyiv's Western allies see the reforms as a chance to end the armed conflict in the east that has claimed more than 6,800 lives over the past 16 months.

Kyiv and the West accuse Russia of backing the rebels with weapons, troops and military advisors, a claim the Kremlin denies.