Ukraine: Russia must cede border by end of year

Peace process 'must be completed by end of year. That is what (February) agreement says and no one is making any attempts to review it,' Ukrainian president says 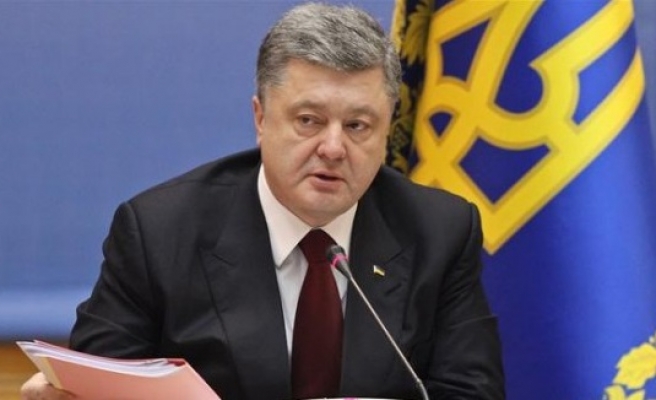 President Petro Poroshenko has stressed Ukraine must regain control of its eastern border with Russia despite an apparent agreement to push back the implementation of a February peace deal into next year.

The Western-backed leader told Ukrainian television late Sunday that he never agreed to the terms announced by French President Francois Hollande at a media event held after summit talks on the crisis in Paris on Friday.

The peace process "must be completed by the end of the year. That is what the (February) agreement says and no one is making any attempts to review it," Poroshenko said.

"The border is a key component of our sovereignty and we are not going to compromise over it," he added.

Hollande said after a four-way meeting that also included Russian President Vladimir Putin and German Chancellor Angela Merkel that the February agreement could not conceivably be implemented by its end-of-year-deadline.

The main sticking point is the date of local elections in Ukraine's eastern separatist provinces of Lugansk and Donetsk.

The shaky truce deal says Russia must cede the entire 400-kilometre (250-mile) stretch of Ukraine's porous eastern frontier the day after those polls are held.

But Hollande told reporters there was insufficient time "to draw up a law, an electoral law that perfectly conforms" to international norms.

He added that the planned elections could take place only 90 days after such legislation is put in place.

The Donetsk insurgents intend to hold their polls on October 18. Their neighbours in separatists Lugansk have their own vote scheduled for November 1.

The insurgents have issued no official comments about Hollande's remarks.

But Russian Foreign Minister Sergei Lavrov said in Moscow on Monday that "the possibility of shifting (the February deal's) deadline was a matter of secondary importance."

"The most important thing is to accomplish what both sides pledged to do," Interfax quoted Lavrov as saying.

The Donetsk militia have already begun preparations for their elections -- a vote that will exclude any person or party that backs Kiev's plans to one day join the European Union and the NATO military alliance.

Ukraine's 18-month revolt has killed more than 8,000 people -- most of them civilians -- and driven about 1.5 million from their homes.

Putin denies backing the insurrections and calls Russian soldiers captured in the war zone off duty or vacationing "volunteers".