NATO's Supreme Allied Commander, Europe, and commander of U.S. forces in Europe said Russia has moved some of its forces inside Ukraine to the south to bring pressure on the port city of Mariupol. 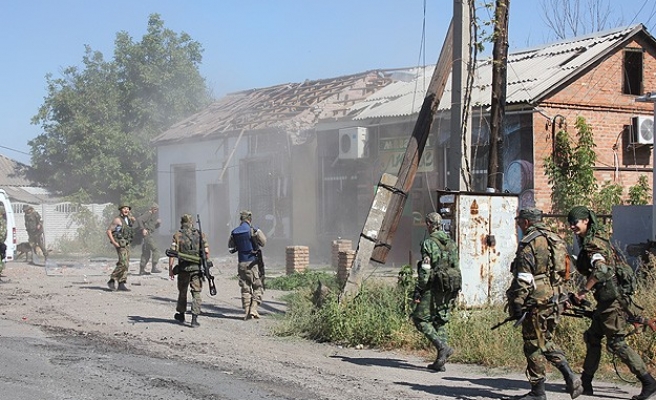 The Ukrainian military accused separatists and Russian troops on Sunday of continuing to shoot at government forces despite a Sept. 5 ceasefire and said Kiev would not go ahead with setting up a proposed buffer zone until the truce violations stopped.

Ukraine's warring sides agreed on Friday to withdraw artillery and other heavy weapons to the outer limits of a 30 km (19 mile) buffer zone, building on the ceasefire in a conflict in eastern Ukraine that has killed more than 3,000 people.

Military spokesman Andriy Lysenko said the pro-Russian separatists and Russian troops were continuing to target the positions of government forces.

"In the last 24 hours we have lost two Ukrainian soldiers, eight have been wounded," he told reporters on Sunday.

Asked about the buffer zone, he said: "One of the main points of the agreement is the ceasefire, then other points follow.

"At the moment the first point has not been fulfilled so we are not talking about the other points. If there is to be a withdrawal of forces then it should be synchronised together with the withdrawal of Russian forces," he said.

Lysenko said separatists had carried out a further attack on the government-held international airport of Donetsk, the east's main industrial hub. The rebels hold the city of Donetsk.

He said 40 separatist fighters had been killed in "defensive" fire by Ukrainian forces. There was no independent confirmation of this figure.

CEASEFIRE "IN NAME ONLY"

Lysenko's comments echoed those of NATO's top military commander U.S. Air Force General Philip Breedlove, who said on Saturday that fighting was continuing in Ukraine and that the truce was a ceasefire "in name only".

"The situation in Ukraine is not good right now," U.S. Air Force General Philip Breedlove told reporters in Vilnius. "Basically, we have ceasefire in name only."

"The number of events, and the number of rounds fired and the artillery used across the past few days match some of the pre-ceasefire levels. The ceasefire is still there in name, but what is happening on the ground is quite a different story."

Breedlove said he hopes a memorandum signed on Saturday for the withdrawal of heavy weapons, including artillery, and all foreign fighters from a 30 kilometre-wide buffer zone will help calm the situation.

Speaking after a meeting of chiefs of defence of NATO countries, Breedlove, who is NATO's Supreme Allied Commander, Europe, and commander of U.S. forces in Europe, said Russia has moved some of its forces inside Ukraine to the south to bring pressure on the port city of Mariupol.

Asked whether Russia's objective is linking up with its forces in Crimea along the Ukrainian coast, he said: "I would not speculate on what their intention is, but they certainly have put in place a military capability to take action along that coast if they chose to do it".

"What we do know is that, from the height of the Russian movement into Ukraine over a week ago, the numbers have come down significantly and some of those forces have returned back to the Russian side of the border. Which is good, except for that they haven't returned home and are still available to bring their military force to bear on Ukraine should it be desired," he said.

"That force is completely capable of doing what it did a little over a week ago, which is cross its border and impose its military will on the Ukrainian military."

Russia's control of the border allows rebel factions and Russian-back forces to be re-supplied, which "will pose huge problems for the Ukrainian army in the future," he said.

Without directly referring to Russian defence minister Sergei Shoigu's announcement that increasing forces in Crimea is one of Russia's "top priorities", Breedlove said NATO is concerned about the Russian "remilitarisation" of the Crimea peninsula.