Foreign Ministry spokesman Yevhen Perebyinis said that the pro-Russian authorities are currently compiling lists of members of the Crimean Tatar Mejlis (Parliament) to join their leaders Refat Chubaov and Mustafa Jemilev in exile. 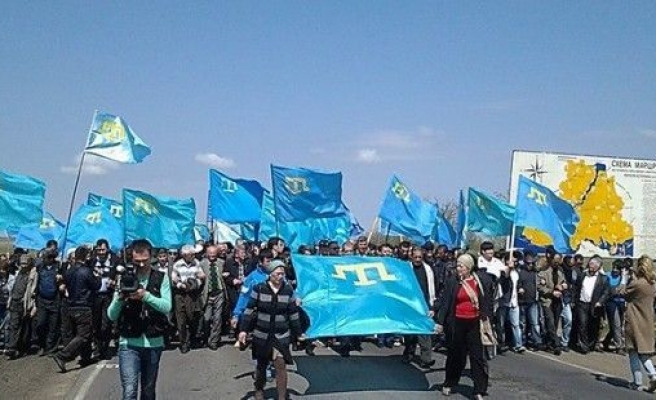 Ukraine's Foreign Ministry has said that Crimean Tatars and Ukrainians who live in Crimea and oppose the annexation of the peninsula by Russia are facing reprisals and threats to their lives from the local authorities.

"Crimean Tatars are facing a real threat of violence. The same applies to Ukrainians who do not agree with the annexation of the Autonomous Republic of Crimea and Sevastopol," Foreign Ministry spokesman Yevhen Perebyinis said at a briefing on Tuesday.

The statement by the Foreign Ministry came after Natalia Poklonska, who was appointed as Crimea's Chief Prosecutor by the pro-Russian regime after its annexation by Russia in March, openly threatened to deport anyone who opposed the annexation.

In an announcement made on her Facebook page in Russian and English, Poklonskaya said said that all actions, which are aimed at the non-recognition of the annexation of Crimea to Russia, will be prosecuted.

Perebyinis said that the pro-Russian authorities are currently compiling lists of members of the Crimean Tatar Mejlis (Parliament) to join their leaders Refat Chubaov and Mustafa Jemilev in exile.

"All these facts confirm the hatred and chauvinistic policies that Russia has been conducting against the Crimean Tatars from the very beginning of the armed occupation and annexation of Crimea," Perebyinis said.

Mejlis members were given 12 hours to clear out their Mejlis building, which was being leased by the Crimea Fund charity for the Crimean Tatar people, or else be evicted by force.

The Crimea Fund was later fined 50,000 rubles for failure to meet the eviction deadline and given a further 24 hours to leave after an order by the Central District Court of Simferopol prohibited the charity from carrying out any of its powers as owner of the Mejlis headquarters and six other addresses, including its right to lease or sell the properties.

Speaking to the Kommersant newspaper after the eviction, Prime Minister Aksyonov said “From the juridical angle, there is no such organization for me. Which Mejlis? The organization was not registered properly. It does not exist.”

Crimean Tatar group ll-Tatar in a statement demanded an end to stop the persecution of Crimean Tatar people, calling on the Crimean authorities not to violate a decree, signed by Russian president Vladimir Putin, on the 'rehabilitation' of Crimean Tatars.

“We demand the Crimean authorities stop the prosecution of the long-suffering Crimean Tatar people. One may not like the political views of Mejlis leaders, but political repressions against civil organization's are still a crime. We ask the President and Prosecutor General of Russia, that Crimean authorities do not violate the decree on rehabilitation and stop political repressions against Crimean Tatars. We ask that those who allow this illegal persecution on an ethnic basis to be punished,” the statement read.

“We also ask Parliamentary Assembly of the Council of Europe and EU leaders to protect Crimean Tatars from the tyranny of authorities,” it added.