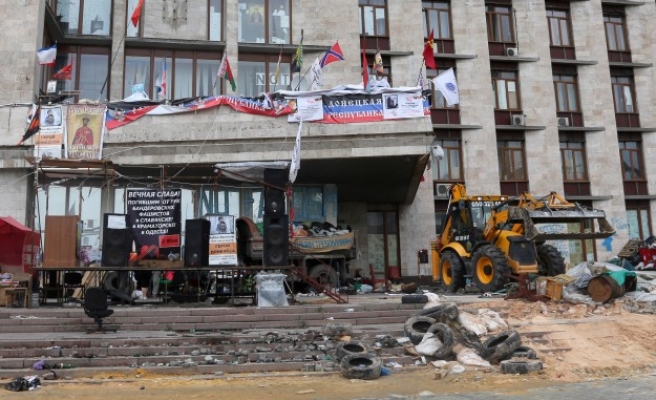 Ukraine said on Wednesday it was confident of receiving further aid under a $17 billion IMF bailout but appealed to Western institutions and donors for further cash and credit to rebuild the east, shattered by separatist conflict.

Prime Minister Arseny Yatseniuk told his ministers that the criteria laid down in the International Monetary Fund's programme had been met and he believed Ukraine was on course to secure soon a second tranche of $1.5 billion.

But Ukraine told international donors on Tuesday in Brussels that the Fund's bailout was not enough to bring about a full recovery because of the drain on the economy caused by the separatist conflict in eastern, Russian-speaking regions.

Pro-Russian separatists have been fighting government forces in the east since April in a conflict in which more than 200 Ukrainian troops have been killed as well as hundreds of civilians and rebels.

The surge of separatism followed political upheaval in Kiev which led to the ousting of a Moscow-backed president followed by Russia's annexation of Crimea.

The conflict has driven relations between Ukraine and Russia to rock bottom with Kiev accusing Moscow of supporting the rebels who have set up 'people's republics' and said they want to join Russia.

After losing a key stronghold, Slaviansk, to government forces at the weekend, separatist forces are now digging in in the big industrial hub of Donetsk, a city of more than 900,000 people. They also remain strong in the city of Luhansk on the border with Russia.

A Ukrainian deputy prime minister on Tuesday urged international donors in Brussels to support a "Marshall Plan" for economic recovery that the government will present at a donors' conference expected to be held in the autumn.

Taking up the same theme on Wednesday, Yatseniuk said Ukraine needed further aid to establish a functioning infrastructure on the border with Russia. The Kiev government has accused Russia of allowing fighters from Russia to cross the border with military equipment and hardware to help the rebels.

In addition, Ukraine wanted help to meet an estimated cost of 8 billion hryvnia (about $700,000) to rebuild roads and bridges, restore water and electricity supplies, and repair public buildings including schools.

Yatseniuk said Ukraine would also want donors help to work out a "post-rehabilitation" programme to regenerate the Donbass - an economically depressed region of decaying infrastructure in the key steel and coal industries - which has become the battleground for the insurgency.

Yatseniuk said he was expecting to meet later on Wednesday a visiting IMF mission which has been examining Ukraine's economic performance since June 24.

"We believe Ukraine has fulfilled the criteria which are written into our IMF programme and we should complete discussions and successfully receive the second tranche," Yatseniuk told a government meeting.

Hundreds of rebels flooded into Donetsk at the weekend after the fall of Slaviansk and have been setting up new barricades and digging in to positions on the outskirts of the sprawling city.

The government says it has worked out a plan to retake Donetsk and Luhansk which will deliver a "nasty surprise" for the rebels, though President Petro Poroshenko has ruled out using air strikes and artillery to defeat them - something which could endanger ordinary civilians.

Igor Strelkov, a Russian from Moscow who is now the main rebel commander in the city, appeared to be disappointed at the number of volunteers coming forward for the rebels.

"Maybe this will help those people who are hesitating to find the strength in themselves and join the ranks," he said.

Ukraine meanwhile accused Russia of abducting a woman army officer who was captured by separatist fighters in eastern Ukraine.

Nadezhda Savchenko, 33, was seized by pro-Russian rebels in June while she was fighting with pro-government militia on the outskirts of Luhansk on the border with Russia, local media say.

Demanding her release, the foreign ministry said in a statement that Savchenko's abduction was "yet more confirmation that the terrorists plan and carry out their crimes in Ukraine in close contact with the intelligence services of the Russian Federation."

"By openly abducting citizens of Ukraine on the territory of their state, the Russian authorities not only violate all international norms but also exceed elementary norms of decency and morality," the statement added.

According to Ukrainian media reports, Savchenko is a helicopter pilot who, during official leave, fought with a pro-government militia group called the Aidar battalion.