The leader of separatist rebels said "The soldiers are hostages of the situation, but I think everything will be OK. We'll reach some agreement." 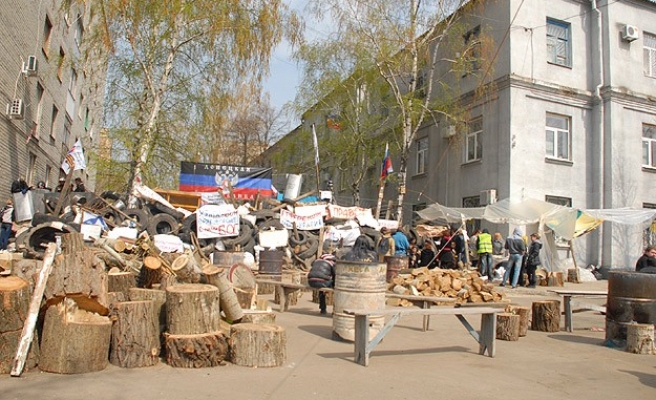 The leader of separatist rebels holding a group of international observers in the Ukrainian city of Slaviansk said he was scheduled on Sunday to meet a delegation of mediators who were on their way to negotiate the observers' release.

He said he spoke by telephone on Saturday to the Organisation for Security and Cooperation in Europe (OSCE) and provisionally agreed a meeting with the visiting delegation.

"They should be here around 12 o'clock (0900 GMT)," Vyacheslav Ponomaryov, the de facto mayor of Slaviansk, told reporters. "When the representatives of the OSCE come, we will talk to them about it (the detained observers)."

Asked about the possibility of freeing the detained military observers in exchange for the release of separatists held by the Kiev authorities, he said: "It's the fundamental option."

"The soldiers are hostages of the situation, but I think everything will be OK. We'll reach some agreement."

Ponomaryov said he had not been in contact with the Russian authorities about the detained observers. He said they were being provided with food and medicine, and that all their needs were being taken care of.

He said his men had overnight captured three officers with Ukraine's state security service who, he said, had been mounting an operation against separatists in the nearby town of Horlivka.

"Last night we detained three officers ... who were on our territory with the aim of carrying out a mission, that is the capture of the leaders of a group that seized (buildings) in Horlivka. They were discovered. Their group was made up of seven people, we got three of them," he said.