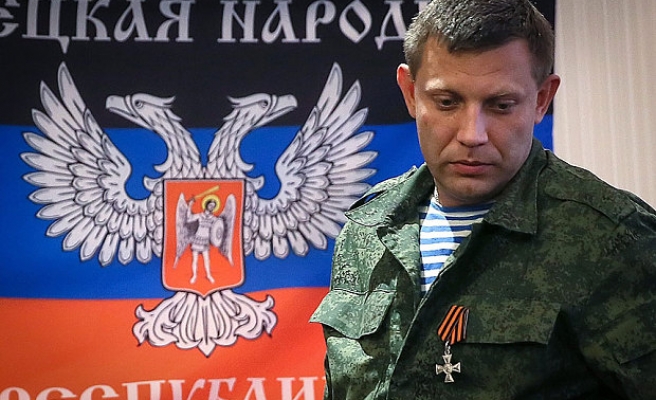 Ukraine's pro-Russian insurgents took a major step toward political reconciliation Tuesday by announcing they will push back disputed local elections into next year in line with Western demands.

The announcement was immediately welcomed by Kyiv's pro-EU leadership and the Kremlin -- a rare case of the ex-Soviet neighbours agreeing since the conflict first started with the ouster of Ukraine's Moscow-backed leader early last year.

The Europrean Union also called the move a "fundamental step" toward peace.

The decision coincided with the withdrawal of Ukrainian tanks from the line splitting government forces from the rebels of one of the two separatist eastern industrial provinces.

The chief negotiators of the self-proclaimed "people's republics" said they had "agreed to postpone the (Donetsk) elections of October 18 and the (Lugansk) poll of November 1 until next year."

Their announcement came just days after the leaders of Germany and France forced Ukrainian President Petro Poroshenko and his Russian counterpart Vladimir Putin to sit down for direct negotiations in Paris aimed at saving a shaky truce in the 18-month war.

That meeting ended with French President Francois Hollande declaring that the rebels could not possibly organise internationally legitimate elections within such a short timeframe.

Kyiv's pro-Western leader has also called the votes "fake" and demanded their cancellation.

Ukrainian officials said Monday that Hollande and German Chancellor Angela Merkel had put strong pressure on Putin -- who denies any involvement in the conflict -- to convince the militia command to delay their vote.

"We examined the statements and recommendations of Merkel and Hollande that were issued after the summit," Donetsk negotiator Denis Pushilin and his Lugansk counterpart Vladislav Deinego said in the statement.

The two met Tuesday in the Belarussian capital Minsk -- the same location where Putin and Poroshenko agreed in February to find a way out of one of Europe's bloodiest crises since the Balkans wars of the 1990s.

The insurgents did not say when they now intend to hold their polls.

But they pressed a series of demands on Kyiv that will be difficult for Poroshenko to push through a Ukrainian parliament where nationalist forces play a strong role.

The two said their elections will be held only after Kyiv assigns them "special status" within a unified Ukraine that has the right to develop closer diplomatic and trade relations with Russia.

The statement also sought full immunity from prosecution "for all participants to events in the Donetsk and Lugansk region" and a new vote in the Ukrainian parliament on constitutional amendments regarding elections that would first be agreed with the rebels themselves.

The date of the rebels' vote is vital because it also determines when exactly Ukraine can regain full control of its porous eastern border with Russia -- a frontier Kyiv accuses the Kremlin of using to arm the revolt.

The February deal says that Russian forces and the militias are supposed cede the 400-kilometre (250-mile) stretch of the border under their control a day after the polls are held.

But the rebels and Moscow argued that Ukraine would only regain its territorial integrity after Kyiv followed through on all the commitments it made in the February deal -- something Ukraine has so far failed to do.

The delay gives the warring sides time to find a political compromise that can put an end to fighting that has already claimed more than 8,000 lives and driven 1.5 million from their homes.

"This is another example of the flexibility and constructive approach shown (by the rebels) as they try to implement the Minsk agreements," Peskov told Russia's Interfax news agency.

A spokeswoman for Leonid Kuchma -- a former Ukrainian president who acted as Poroshenko's personal representative at the various peace talks conducted throughout the war -- said Kyiv also "welcomed the decision".

"This step will give us an opportunity to conduct fair, legitimate and impartial elections in parts of the Donetsk and Lugansk regions under Ukrainian law," spokeswoman Dariia Olifer wrote on Facebook.

And a government source in Berlin said simply that "Moscow has kept its word."