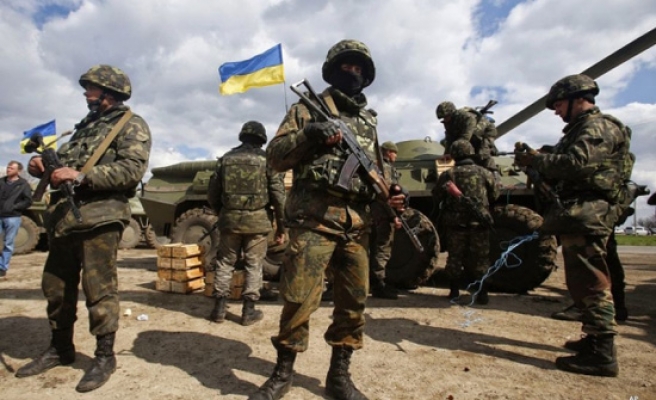 Ukrainian armed forces and pro-Russian insurgents on Thursday exchanged 20 prisoners in a goodwill gesture designed to get peace talks aimed at ending the 18-month crisis back on track.

The swap took weeks to organise and was the first of its kind since September 8.

The pro-Russian eastern militia handed over eight Ukrainian soldiers and one civilian in neutral territory in the predominantly separatist Lugansk province -- under the watchful eye of observers from the Red Cross.

In exchange the Ukrainian side gave up 11 rebels captured in the course of fighting that has claimed more than 8,000 lives and wrecked havoc on what was once the former Soviet republic's industrial heartland.

One of them, 33-year-old Oleksandr, said he was captured during intense clashes for control of the now-destroyed airport of Donetsk, the rebels' effective capital and one of the conflict's most deadly hotspots.

Oleksandr said he had spent nine months in captivity and after a series of failed exchanges had lost hope of ever returning home.

"We were captured on January 21, when we had no choice but to start negotiations because we were carrying too many wounded soldiers," he told AFP moments before the swap.

"There is still one more 'cyborg' in captivity," he added using the term Ukrainians have proudly given to those brave enough to fight so deep inside enemy land.

"The first thing I will do when I get home is embrace my family," he said in a trembling voice.

Another soldier, 35-year-old Sergiy, looked exhausted and was shaking from cold.

"The first thing I will do is go to the hospital. I have serious problems with my leg", he said, adding that he could hardly believe his luck at being included in the exchange.

The Ukrainian government believes the rebels are still holding 148 people -- including 59 civilians -- in the two rebel provinces which launched their war in the wake of last year's overthrow of Kiev's Moscow-backed president.

The Donetsk and Lugansk insurgents claim Kiev is holding 2,400 of its fighters and civilians captive although exact figures are hard to independently verify.

The exchange took place during a two-month lull in fighting that has raised hopes of an end to one of Europe's deadliest conflicts since the Balkans wars of the 1990s.

Although both rebel and government forces continue to gradually withdraw weapons from the so-called line of contact in the war zone, the process has been slow and periodic exchanges of deadly mortar fire still flare up.

Ukrainian army spokesman Oleksandr Motuzyanyk said Thursday that one serviceman had died in a Donetsk region mine blast in the past 24 hours.

The sporadic fighting and seemingly irreconcilable differences over the pro-Russian regions' future status within a unified Ukraine means that a peace process that was meant to be finished by the end of the year will drag on into 2016.