Ukraine urges US, EU to press Russia over jailed pilot 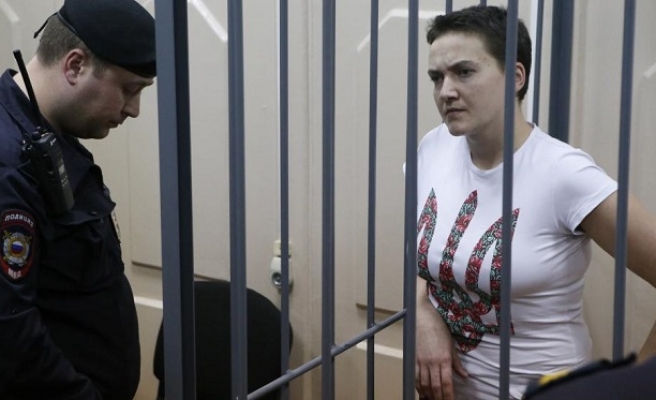 Ukrainian President Petro Poroshenko called on Washington and Brussels on Monday to step up pressure on Moscow to secure the release of a hunger-striking Ukrainian pilot from a Russian jail.

Three Nobel Prize laureates were also among thousands of people who signed a petition urging European leaders "to take emergency measures" to seek the return home of 34-year-old Nadiya Savchenko.

The helicopter pilot is standing trial for alleged involvement in the death of two Russian journalists in war-scarred eastern Ukraine in 2014.

She faces up to 23 years in prison if convicted in a trial that has drawn global attention and been attended by Western monitors concerned about Russia's allegedly deteriorating human rights record.

Savchenko denies all charges and has refused all food and drink since her hearing was adjourned Thursday before she was given a chance to make a final statement.

Poroshenko wrote on Facebook that "Ukraine has sent a letter to EU nations and the United States with the request to intensify their pressure on Russia aimed at securing our Nadiya's release."

Her case is seen by many Ukrainians as a symbol of resistance against what Kyiv's pro-Western leaders view as Russia's aggression in the eastern industrial heartland of the former Soviet state.

Hundreds of demonstrators rallied Sunday outside Moscow's diplomatic mission in Kyiv to demand her repatriation to Ukraine. The protests saw the Russian embassy pelted with eggs and stones and the windows of at least one diplomatic car smashed.

The Belarussian writer Svetlana Alexievich and two other Nobel Prize winners in literature -- Austria's Elfriede Jelinek and the Lithuanian-American Tomas Venclova -- told European leaders that Savchenko's life and the bloc's credibility were at stake.

"Our ability to save her life will test the effectiveness of international diplomacy and our commitment to European values," said an open letter posted online Sunday and signed by more than 5,000 people by early Monday.

Savchenko was "kidnapped and imprisoned for more than 20 months in the Russian Federation," the letter said.

"The Russian authorities have made a mockery of civil rights, international law, and their own Constitution. They show disdain for the international community and the Minsk Protocol" that aims to bring an end to the 23-month war.

"She's been detained for no good reason, and we want to see her released and sent home where she belongs," Toner said.

She denies any involvement and says she was kidnapped and smuggled into Russia.

Her supporters fear her refusal to drink may irreparably damage her health or even kill her before her next hearing on Wednesday.

Savchenko's Russian attorney said on Monday that his client was already suffering from "an accelerated heart beat, swelling legs and jumps in temperature."

"She is still forbidding Russian doctors from performing any tests or medical procedures," lawyer Nikolai Polozov wrote on Facebook.

The separatist war in Ukraine has claimed more than 9,100 live since pro-Russian insurgents angered by the ouster of Ukraine's Moscow-backed leadership revolted against the Kyiv authorities in April 2014.

Russia rejects Ukrainian and Western charges of instigating and backing the unrest.