Poroshenko says there are 9,000 Russian troops in Ukraine, government forces pull back from Donetsk airport 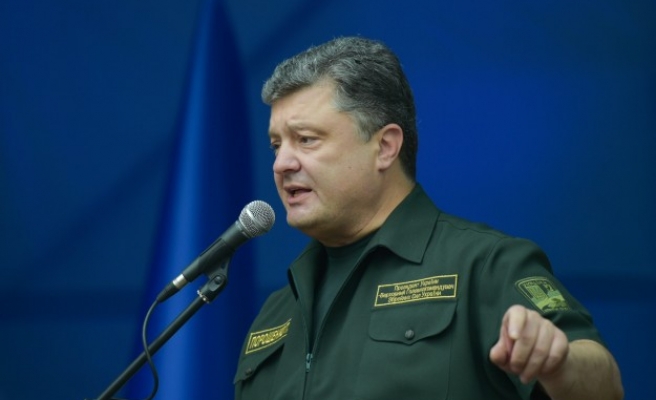 Ukrainian President Petro Poroshenko said on Thursday his troops were holding the line against separatists and Russian forces after a sharp increase in attacks and the withdrawal of government defenders from Donetsk airport.

Poroshenko, who told the World Economic Forum on Wednesday that Russia had 9,000 troops inside Ukraine, met defence chiefs to work on a plan to "regroup and stop aggression".

"Across all front lines we are firmly holding our positions," he told the meeting, at which he reported that enemy attacks were 10 times more intensive than before.

Earlier on Thursday at least eight civilians were killed when a trolleybus was hit by an artillery shell or mortar at a public transport stop in the southern district of Donetsk, which is largely controlled by separatists.

Poroshenko's comments echoed a report from NATO that said fighting in separatist territories was now more intense in some places than it was before September's Minsk ceasefire agreement.

The missile strike that destroyed the trolleybus followed a night of intense fighting at the city's main airport.

Kiev said 10 Ukrainian soldiers were killed overnight, six at the airport complex, a symbolic target where a small group of government defenders had been holding out against Russian-backed separatists for months.

A military spokesman said government forces had withdrawn from the airport's new terminal, the core of the complex, in what appeared to be a setback for Ukrainian forces and for Poroshenko himself, who had said the airport should not be surrendered.

Rebel leader Alexander Zakharchenko urged local residents to gather at the scene of the bus attack, promising them the opportunity to confront captured Ukrainian servicemen. Separately, video footage showed a handcuffed prisoner being abused and punched by onlookers near the wrecked bus.

Ukrainian Prime Minister Arseny Yatseniuk blamed separatists, who Kiev says are being armed by Moscow. Russia, which denies any direct involvement, described the attack as a "crude provocation" by Kiev to undermine peace efforts.

The United Nations condemned the attack and said it did not know who was responsible.

"That trolleybus attack clearly appears to us as being a targeted attack," United Nations spokesman Stephane Dujarric told reporters in New York. "Targeted attacks against civilians constitute a grievous violation of international humanitarian law and must be investigated."