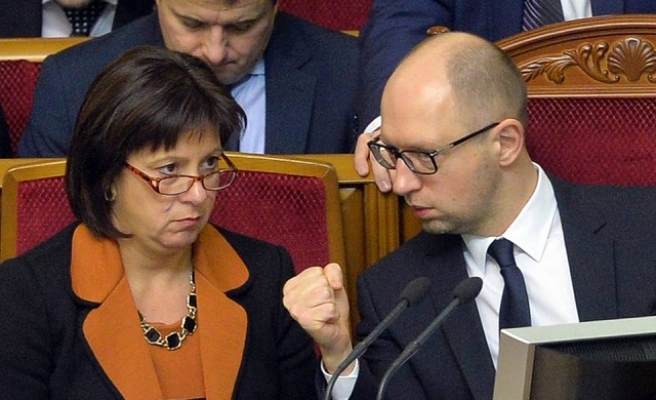 Ukraine and its biggest lenders appeared to be making cautious but steady progress Tuesday toward a debt restructuring deal that would save the war-torn country from hurtling into default.

The Wall Street Journal reported Monday that a group of commercial creditors holding nearly half of the $19 billion (16.5 billion euros) in debt under negotiation have offered to take a 20 percent write-down on the face value of their bonds.

But a person close to the discussions said no deal had been finalised and the situation remained very fluid.

"Talks remain ongoing and all options for the Ukrainian side remain on the table," the person said.

The creditors' reported agreement to accept a larger-than-expected reduction in their assets' value marks a potential breakthrough that could keep cash-starved Kyiv from enforcing a threatened debt repayment freeze next month.

Ukraine had originally asked for a 40 percent write-down in order to save $15.3 billion over the coming four years -- an economy required by a $40 billion global rescue package the International Monetary Fund patched up in February.

The four main bondholders -- led by Franklin Templeton and due $8.9 billion over the course of the IMF deal -- rejected the proposal and eventually offered to take a hit of up to 10 percent under strict terms.

The five-month negotiations are running up against a September 23 deadline for Ukraine to repay a $500 million Eurobond that was issued by the Russian-backed government of Viktor Yanukovych -- which was ousted in a pro-European revolution last year.

Kyiv says it cannot make the September principal payment because this would breach its IMF agreement to restructure $15.3 billion in debt.

But more indirect signs of progress emerged Monday when Kyiv reportedly made a $60 million interest payment on another Eurobond that kept it from slipping into a technical default.

The possibility of Ukraine imposing a repayment moratorium could shut Kyiv out of global borrowing markets and severely hamper its IMF-imposed austerity and economic restructuring drive.

A deal with the four financial titans would open the way for Kyiv to strike similar agreements with the other bondholders.

Time is running short because the broader negotiations are stipulated to last no more than three weeks.