The Kiev military said separatist attacks had continued in the past 24 hours up to the start of the Day of Silence. 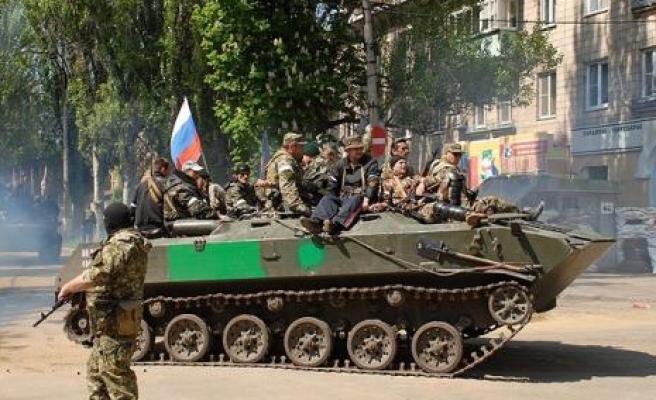 Ukrainian government forces said they had suspended combat operations as a "Day of Silence" began in the war-torn east on Tuesday, marking an effective ceasefire on the front line of the conflict with separatist rebels.

In the city of Donetsk, the separatists main stronghold, a Reuters correspondent said firing was heard up to 9 a.m. but later appeared to have slackened off.

"The Ukrainian military have suspended all combat actions and are ready for the Day of Silence, but if separatists attack we will fire in response," a military spokesman said by telephone.

The Ukrainians have billed the Day of Silence a litmus test for the readiness of Russian-backed separatists to reinforce a ceasefire which was agreed three months ago but which has been regularly breached with almost daily deaths among government forces, civilians and rebels.

If it holds, it could improve prospects for a renewal of peace talks in the Belarussian capital Minsk later this week involving Russia, Ukraine and separatist leaders under the auspices of the Organization for Security and Cooperation in Europe.

It was in talks by the so-called contact group in Minsk in early September that a 12-point blueprint for peace, including a ceasefire, was worked out.

But much has changed in eastern Ukraine since then. The separatists have declared "people's republics" and elected officials, while on the battlefield, separatist assaults have continued on the main international airport in Donetsk to wrest control from government forces.

Russian Foreign Minister Sergei Lavrov said an easing of tensions in eastern Ukraine was still a long way off, despite an announcement by Kiev that it had suspended combat operations against pro-Russian rebels.

Lavrov said negotiations meant to accompany the unilateral truce, dubbed the "Day of Silence" in Ukraine, would take place in 'the coming days', though no day has been set for the talks.

Speaking about steps taken in previous months to reduce tensions in eastern Ukraine where pro-Russian rebels took up arms in April, Lavrov told RIA news agency in an interview: "As of yet, it is fully obvious that we are far from that goal."

"In the coming days, a meeting of the contact group is planned, in which will be discussed a plan prepared by military specialists of practical measures... with the aim of a final ceasefire," RIA quoted Lavrov as saying.

Ukraine also accuses Russia of failing to withdraw fighters and military equipment as agreed in September.

The United Nations says more than 4,300 people have been killed in eight months of conflict which has driven relations between Russia and the West to the lowest since the Cold War.

Two civilians had been killed and 10 others wounded "as a result of sudden artillery fire by (separatist) fighters on populated areas," it said.

The government forces and pro-Russian rebels have both flouted a Sept. 5 truce. Talks, under the auspices of the Organization for Security and Cooperation in Europe (OSCE), were meant to work towards cementing the truce by agreeing on measures such as moving heavy weapons away from the front line.

Talks were planned in Minsk, the site of previous meetings, including one that clinched the Sept. 5 ceasefire deal, but RIA said Kiev wanted the talks to be carried out on Tuesday while rebels wanted more time and to hold the talks on Friday.

Lavrov also warned in the interview with RIA that Russia would be forced to take "adequate measures" against U.S. plans to establish an anti-missile system in Europe, which Russia has long complained was meant to target Russian missiles.