Poroshenko offered the rebels an olive branch by saying he would propose a bill next week offering "special status" to parts of the Donetsk and Lugansk regions of eastern Ukraine they now control. 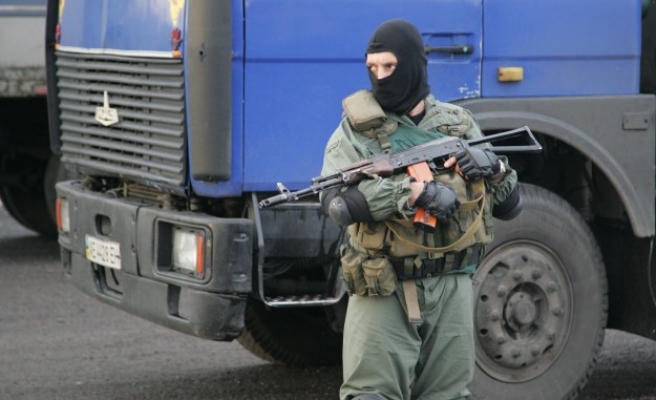 Ukraine's president said on Wednesday Russia had removed the bulk of its forces from his country, raising hopes for a peace drive now underway after five months of conflict in which more than 3,000 people have been killed.

President Petro Poroshenko told a televised cabinet meeting Ukraine would remain a sovereign, united country under the terms of a peace roadmap approved last Friday, but said parts of the east under rebel control would get special status.

"According to the latest information I have received from our intelligence, 70 percent of Russian troops have been moved back across the border," Poroshenko said. "This further strengthens our hope that the peace initiatives have good prospects."

However, Poroshenko said the ceasefire was not proving easy to maintain because "terrorists" were constantly trying to provoke Kiev's forces.

Ukraine's military recorded at least six violations of the ceasefire overnight but said there were no casualties. Five servicemen have been killed during the ceasefire, Ukraine says. A civilian was also killed at the weekend during shelling of the eastern port of Mariupol.

Poroshenko said Ukraine was regrouping its forces in eastern Ukraine, not in preparation for a new offensive against the rebels, as they have suggested, but in order to defend territory from possible attack by the separatists.

The Kremlin said Russian President Vladimir Putin and Poroshenko were broadly satisfied with how the ceasefire, in place for nearly five days, was holding in Ukraine. The two leaders spoke by phone on Tuesday for the second time this week.

In his televised remarks, Poroshenko offered the rebels an olive branch by saying he would propose a bill next week offering "special status" to parts of the Donetsk and Lugansk regions of eastern Ukraine they now control.

But he was adamant in rejecting the separatists' demands for full independence for their regions and the kind of radical "federalisation" favoured by Russia.

"The Minsk protocol envisages the restoration and preservation of Ukrainian sovereignty on all the territory of the Donbass (in eastern Ukraine), including that controlled by the fighters," Poroshenko said.

"There is no question of federalisation or separation of any Ukrainian territory."

The European Union and United States have imposed economic sanctions against Russia over its role in Ukraine, prompting Moscow to retaliate by banning most Western food imports.

The EU has prepared another wave of sanctions targeting Russia's banking and energy sectors but has held off implementing them to see whether the ceasefire holds.

On Wednesday, Poroshenko signed a law allowing Ukraine to impose its own sanctions against Russian firms and individuals deemed to be backing the separatists in eastern Ukraine.

In Prague, the chairman of the Organisation for Security and Cooperation in Europe (OSCE), which is monitoring the ceasefire, said it would be reasonable to allow more time for the peace process before imposing more sanctions against Russia.

Didier Burkhalter, who is president of Switzerland, also said the OSCE would soon deploy drones to monitor the ceasefire.

Human rights group Amnesty International said in Moscow it had documented evidence of war crimes by both sides and also repeated criticism of Russia's role in the conflict.

"Amnesty International has called the conflict in Ukraine an international conflict and Russia a party to that conflict," the group's secretary general, Salil Shetty, told a news conference.