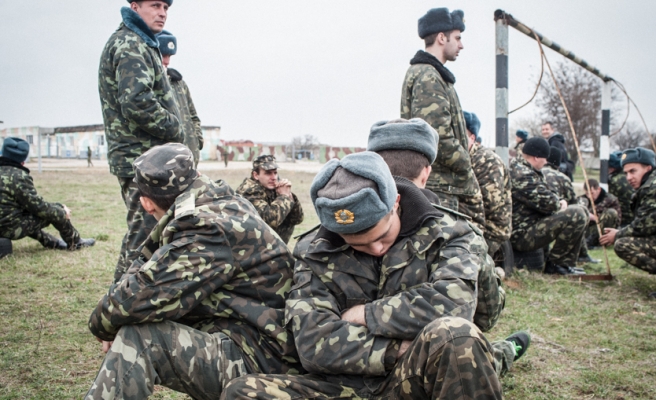 The gunmen lined up around 20 pale-looking prisoners in two silent rows in the ruins of the airport terminal. Somehow still clinging to a wall pulverised by bullets and artillery was a sign marked "Lost and Found".

The captured Ukrainian soldiers had been brought into the ruins of the airport and ordered to hunt for the dead bodies of their comrades under pieces of concrete.

The once-gleaming international airport in Donetsk, built to host the 2012 European soccer championship, became a charnel house during eight months of intense fighting, the most fiercely contested spot in east Ukraine.

Kiev's troops held out here through a battle that destroyed much of the northwest of the city, the main rebel stronghold. They were finally forced out in January when rebel fighters abandoned a five-month-old ceasefire to launch an advance.

Today, a new truce has taken hold and the airport is now firmly under rebel control, but there are still dead Ukrainian soldiers buried in its rubble. A rebel commander explained why he had brought prisoners to recover them: "It's not our job to look for dead bodies. It's our job to make them."

"They take their comrades out to return them to their mums and dads," said the commander of the separatist "Sparta" battalion, Arseny Pavlov, a Russian who goes by the nom de guerre "Motorola".

War prisoners, he added, needed to earn their keep. "Did they think we would feed them for free?"

Motorola's uniform looked brand new. He arrived at the destroyed terminal on a quad bike and stood next to the bodies of three Ukrainian soldiers, among five the prisoners said they had recovered from the ruins the previous day.

Like Motorola himself, the corpses were wearing body armour and knee pads. Their uniforms had turned the colour of the concrete they had lain under for weeks. Their faces were dark and decomposed.

One of the prisoners, Vladimir from the west Ukrainian city of Ternopyl, said he had been captured right here in the terminal.

"Personally I did not know any of them," he said of the dead men. "I was a driver. I evacuated the wounded. A vehicle like mine is standing burnt out over there."

The prisoners would now be expected to find another three bodies still believed to be buried in the rubble, the rebels said. Vladimir was sent up a ladder to where the building's second and third floors had collapsed onto the first.

"This is a very dangerous job. Let them do it," said a rebel fighter who gave his name as Alexei Nikulin. He described himself as a civilian volunteer from the Russian town of Tula, a veteran of the last Russian war in Chechnya 15 years ago. Moscow denies its serving soldiers are fighting among the rebels although many fighters freely acknowledge they are from Russia.

How long it will be until the men, dead and alive, are returned to their families is difficult to say. The last prisoner exchange took place on Saturday.

The devastation of the airport is near total. Shrapnel stripped the branches from trees in a grove near the terminal. The wreckage of several destroyed planes litters the site.

Inside the building, gunmen walked past the "Tourist Information" sign amid collapsed walls. Fragments of seats from boarding areas were covered with mud and empty bullet cases. Obliterated cars were still parked in the parking lot.

An army boot and unidentifiable human remains lay outside the terminal surrounded amid shell craters. Nearby, a bullet-riddled road sign points in the direction of departing and arriving flights. (