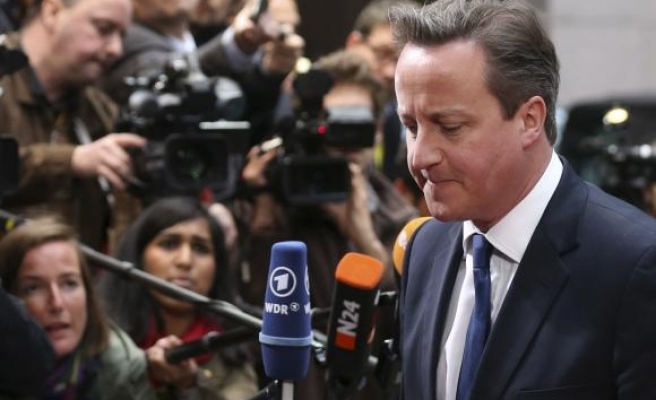 Britain on Sunday resisted pressure to join the United States in announcing air strikes against ISIL (IS) after the militant group beheaded David Haines, a British hostage.

Speaking after chairing a meeting of the government's emergency response committee in London, Prime Minister David Cameron said his government was battling IS on numerous fronts but was not, for now, launching air strikes.

"As this strategy intensifies we are ready to take whatever steps are necessary to deal with this threat and keep our country safe," he said in a TV statement from his office.

"Step by step, we must drive back, dismantle, and ultimately destroy ISIL (IS) and what it stands for. We will do so in a calm deliberate way, but with an iron determination."

Britain has in the past often been the first country to join U.S. military action overseas, but war-weary public opinion, parliament's rejection last year of air strikes on Syria, and sensitivities surrounding Scotland's independence referendum on Thursday mean Cameron is reticent this time round.

U.S. Secretary of State John Kerry is expected to discuss the aid worker's beheading with British Foreign Secretary Philip Hammond at a meeting in Paris on Monday. "I am sure that will be a topic of discussion," one senior U.S. State Department official said in Paris on condition of anonymity, referring to the murder.

Cameron outlined no plans to recall parliament, which is in recess, in order to seek its authorisation for air strikes against IS, and people familiar with his thinking say he has no immediate plans to do so.

His last attempt to get the British parliament to back such air strikes, against Syria last year, failed to win the support of lawmakers.

Video footage of the murder of Haines by IS militants fighting in Iraq and Syria means Cameron, who is also trying to persuade Scotland to reject independence in Thursday's referendum, is under pressure to get much tougher with IS.

He has said he isn't ruling out any options to degrade IS, with the exception of putting boots on the ground, but is facing increasingly loud calls from some of his own Conservative lawmakers and from former military chiefs to join the United States in launching air strikes.

With Scotland his domestic priority, he is aware that many Scots have traditionally been more sceptical of British military action overseas and that proposing air strikes now could risk alienating them before the independence vote.

Cameron, who returned to London ahead of schedule on Saturday night to chair the emergency COBR meeting, called the murder of Haines, a 44 year-old Scottish aid worker, callous and brutal, hailing the murdered man as a "British hero".

"We will hunt down those responsible and bring them to justice no matter how long it takes," he said, calling IS "the embodiment of evil".

"They are not Muslims, they are monsters," he said.

Britain's Foreign Office said the Haines video showed "all signs" of being genuine. Reuters could not immediately verify the footage, but the images were consistent with those of the filmed executions of two American journalists, James Foley and Steven Sotloff, in the past month.

Haines's executioner appears to be the same man who featured in videos with Foley and Sotloff. The man, nicknamed "Jihadi John" by Western media, seems to have a British accent. At the end of the same video, another hostage is shown and threatened.

Security services in Britain have been trying to identify the executioner. A British security source speaking on condition of anonymity said an investigation was underway into the killings and that senior intelligence officials had attended the meeting of the emergency committee that Cameron chaired.

The source declined to go into detail about what, if any, progress the investigation had made.

Faced with the rise of IS, Britain has so far confined itself to delivering humanitarian aid, carrying out surveillance, arming Kurdish forces who are fighting IS militants and promising training in Iraq.

Sir Richard Dannatt, former head of the British army, said on Sunday IS executions should not deter the government from taking military action against the militants.

"If we don't confront and destroy these ISIL Jihadi fighters then their influence will grow, their confidence will grow and the problem will get bigger," he told Sky News.

Mike Haines, brother of the slain aid worker, said on Sunday that David had chosen humanitarian work in Syria but had been murdered in cold blood.

"He was and is loved by all his family and will be missed terribly," Mike Haines said in a statement released through the British Foreign Office. He said his brother left behind two daughters from two marriages.

Asked in a BBC interview if an independent Scotland would be prepared to take military action against IS, he said any response must be under United Nations auspices, underlining Scottish anxiety about any unilateral military action.

"You can't have a strategy where you bow to terrorism. There's an urgent requirement to get back to collective (action) under the United Nations," he said.

Salmond has called the 2003 Iraq invasion illegal because it was not launched with U.N. approval.

Haines was remembered in prayers at the morning service in Edinburgh's St. Mary's Cathedral, where provost Graham Forbes praised him for his dedication to humanitarian work.