UK's Cameron to get advice from US gang expert

British police flooded the streets again on Friday night to ensure weekend drinking does not reignite the rioting that shocked Britons and sullied the country's image a year before it hosts the Olympic Games. 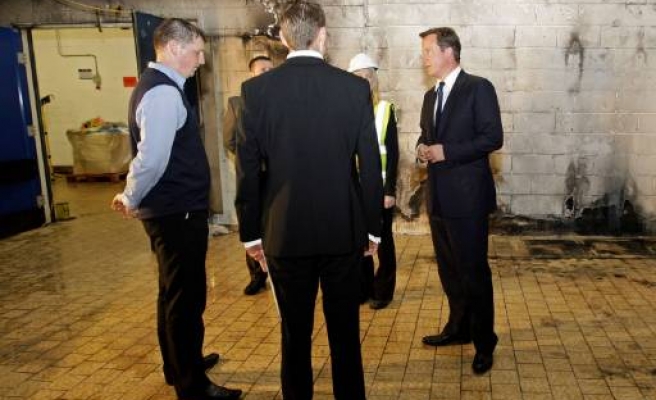 British Prime Minister David Cameron, under attack over his leadership during the rioting and looting that swept English cities this week, has enlisted U.S. street crime expert William Bratton to advise the government on handling gang violence.

"I'm being hired by the British government to consult with them on the issue of gangs, gang violence and gang intervention from the American experience and to offer some advice and counsel on their experience," Bratton told Reuters in New York.

British police flooded the streets again on Friday night to ensure weekend drinking does not reignite the rioting that shocked Britons and sullied the country's image a year before it hosts the Olympic Games.

Steve Kavanagh, deputy assistant commissioner of the Metropolitan Police, said 16,000 officers, instead of the usual 2,500, would remain on duty in London in their biggest peacetime deployment -- a measure of the perceived public order challenge.

Other forces, including those in Nottingham, Birmingham and Liverpool, said they would maintain a high level of policing over the weekend, though they said they did not expect further trouble after a couple of nights of quiet.

Even in normal times, alcohol-fuelled street disorder is common across urban Britain at weekends.

Cameron, describing the four nights of looting, arson and violence, in which five people were killed, as "criminality, pure and simple", said the initial police response had been inadequate.

His remarks drew a sharp reaction from the police service, which is facing deep cuts in numbers as part of a government austerity drive aimed at cutting the large public debt.

"The fact that politicians chose to come back is an irrelevance in terms of the tactics that were by then developing," said Hugh Orde, head of the Association of Chief Police Officers, referring to Cameron and other senior ministers who cut short their holidays after two days of mayhem at home.

Bratton, credited with curbing street crime as police chief in New York, Los Angeles and Boston, said he would help the British government develop strategies on dealing with widespread rioting and gang culture.

"The government is very interested in trying to quickly come up with strategies and plans to deal with the issues and concerns identified during these riots," said Bratton, a former police chief and now chairman of private security firm Kroll.

A Downing Street spokesman said Cameron had spoken to Bratton on Friday, and that Bratton would join a series of meetings in the autumn, working unpaid and in a personal capacity. Bratton has worked with the British police at other times over the past 20 years.

Cameron himself has not escaped criticism. A ComRes poll for The Independent newspaper showed that 54 percent of Britons say he failed to provide leadership early enough to control the riots, while an ICM survey for The Guardian showed that only 30 percent thought Cameron responded well to the riots and 44 percent thought the opposite.

More than 1,200 people were arrested during and after the unrest. One London looter, 24-year-old Natasha Reid, turned herself in to police because she could not sleep for guilt after stealing a television, according to her defence lawyer.

In another case, Chelsea Ives, 18, one of thousands of people enrolled as "ambassadors" to help visitors to the 2012 Olympics, was identified by her mother who saw her on television after allegedly throwing bricks at a police car. Ives denied charges of burglary and violent disorder.

Courts have sat through the night to process those accused of crimes ranging from assault to stealing a bottle of water.

Offenders include a millionaire's daughter, a charity worker and a journalism student, but most are unemployed young men.

Some police forces have taken unusual steps to crack down on the protesters and deter future violence.

Greater Manchester Police launched a 'Shop A Looter' campaign using social media sites like Facebook and Twitter to encourage people to inform on those suspected of looting, and posted pictures on its website (http://www.gmp.police.uk/disorderconvictions) of people convicted of offences.

"The fightback has well and truly begun," Cameron told an emergency session of parliament on Thursday, outlining a range of measures aimed at preventing any repeat of England's worst riots in decades. Targeting street gangs became a top priority.

The trouble began in London after police shot dead a black man and refused to give his relatives information about the incident, but then degenerated into widespread looting and violence in many parts of the capital and other major cities.

The Conservative Party, which irked right-wing supporters by going into coalition with the left-leaning Liberal Democrats last year, is desperate to show it is tough on crime.

A Conservative minister said on Friday he would see if he could make it easier to evict people from government housing for rioting. "...I don't think this is a time to pussyfoot around," said communities minister Eric Pickles, adding that his plan would require legal changes.

British media reported that one London council was already trying to evict a tenant from such housing after the tenant's son was charged with offences linked to the riots.

A 68-year-old man who was attacked as he tried to put out a fire set by rioters in London on Monday night died of his injuries, officials said on Friday.

Three men were killed in Birmingham, central England, when a car drove into them as they tried to stop rioters, and a man died after being shot during riots in Croydon, south London.

The scale and ferocity of the rioting, not only in inner-city areas but also in some middle-class suburbs, has generated a law and order debate with starkly different views.

"There's got to be a curfew put in place. I would have put in as many police as possible straightaway -- they did that eventually. I probably would have used teargas myself," said Graham Sawyer, 46, a construction site project manager from Romford, east of London.