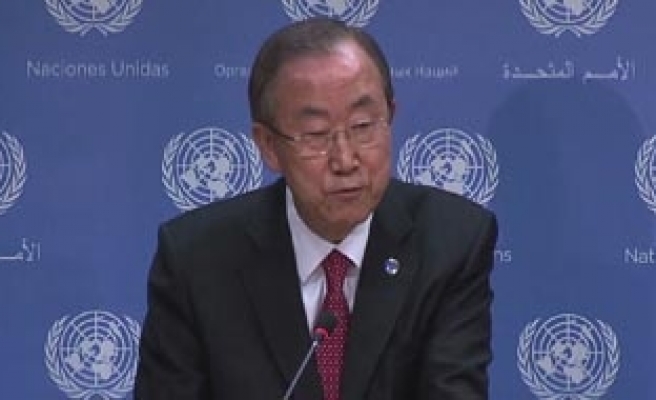 “Addressing violent extremism in a manner that solves rather than multiplies the problem may be the greatest test our human family faces in the 21st century,” Ban said.

International peace is threatened by the emergency of new terrorist groups, he said, and suggested ways to combat the threat, including the promotion of human rights and an understanding of the roots of extremist ideology.

He also echoed the words of President Barack Obama who also said at the summit that local communities need to be employed in the fight against extremism because local ties can be used to isolate radical groups.

The State Department hosted a ministerial level meeting as part of the summit where understanding violent extremism was discussed.

African Union Commissioner for Peace and Security, Smail Chergui, said terrorist groups such as Boko Haram cannot be defeated "without addressing the financing and sponsorship of terrorist groups."

Jordan’s representative at the meeting said a global effort is needed to fight extremist ideas and offered a solution.

“War against extremism and radical ideology is our war and we must defend ourselves and our faith,” said Nasser Judeh, Jordan’s Minister of Foreign Affairs. The solution to solving the problem, he said, is “education, opportunity, and empowerment.”

The Director of the National Counterterrorism Center conceded that ISIL is more difficult to fight than other terrorist organizations, and emphasized the group’s highly efficient use of social media is the biggest challenge to preventing young recruits.

The terror group’s ability to attract foreign fighters to Syria and Iraq plays an important role in its power, said Nick Rasmussen, as he cited ISIL’s discourse that reaches far beyond the boundaries of the territories it currently holds.

According to the United Nations, more than 13,000 fighters from more than 80 countries have joined ISIL and other militant groups in Syria and Iraq.

France’s Interior Minister Bernard Cazeneuve, also referred to French nationals leaving to join groups like ISIL, and said that in order to fight such groups, “We are on the field to detect sign of radicalization.” He acknowledged the crucial role the Internet plays in promoting the ideology of terrorist groups, and said France has proposed measures to counter extremist ideologies, including blocking certain websites that defend and propose such groups.

At the UK-based International Centre for the Study of Radicalization, Peter Neumann focuses on the “nearly 4000 people” from Western Europe who have joined ISIL.

Of those, the group contacted 700 of them via social media, and was able to converse with 100 – some even face-to-face, said Neumann.

He suggested that when recruits return to their countries, some will assimilate back into to Western life and some will need psychological help to cope with what they faced when they trained with ISIL.

But there will be also a number of recruits who will return with military training and a global network that will seek to inspire others. “They will be future leaders of their movement. Basically, next generations of Osama Bin Ladens are working on their own career now,” he warned.