The UN court in The Hague said Serbian Radical Party leader Vojislav Seselj does not have to be present for his war crimes verdict this month, despite its previous demand for him to return. 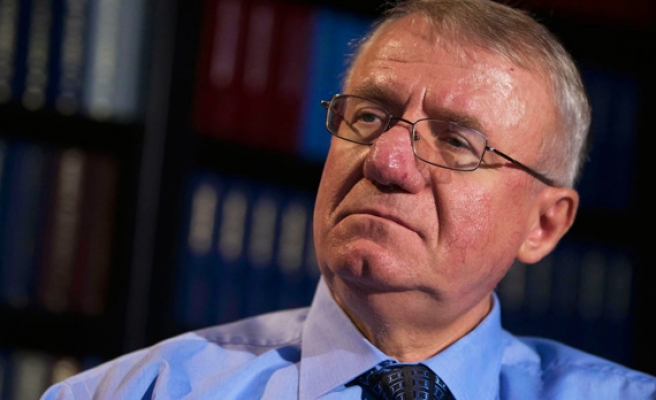 UN war crimes judges will deliver another landmark verdict Thursday, this time against firebrand radical Serb leader Vojislav Seselj -- but in the absence of the defiant defendant, who has refused to return to The Hague.

Exactly a week after former Bosnian Serb leader Radovan Karadzic was sentenced to 40 years in jail for genocide and nine other charges, the judges at the International Criminal Tribunal for the former Yugoslavia (ICTY) will pronounce judgement on Seselj in the same courtroom.

Seselj faces nine charges of war crimes and crimes against humanity. It will be the first time that judges at the ICTY return an initial verdict without the accused in court -- although defendants have been absent for appeals judgements.

The court has excused him from attending on medical grounds.

Seselj, 61, was allowed to return to Serbia in 2014 for treatment for colon cancer, and the judges said earlier this month his medical care "cannot be interrupted or stopped for him to be prosecuted in The Hague".

While he has maintained he is in poor health, earlier this month he was seen at a rally in Belgrade setting fire to EU and NATO flags.

A day later he was seen paying his respects at the grave of former Serbian strongman Slobodan Milosevic -- who died in his cell in The Hague in 2006 while on trial for genocide, war crimes and crimes against humanity.

As leader of the far-right Serbian Radical Party, Seselj also intends to run for parliament in elections next month.

According to the charge sheet, Seselj "is alleged to have propagated a policy of uniting 'all Serbian lands' in a homogeneous Serbian state, which he referred to as 'Greater Serbia'," set to include Serbia, Montenegro, Macedonia, Croatia and parts of Bosnia-Herzegovina.

A former law student, he is alleged to have been criminally responsible for murder, torture and cruel treatment, persecution, deportation and "wanton destruction" of institutions on religious grounds during the 1990s conflicts.

Through his actions and "inflammatory speeches," he allegedly "instigated Serb forces to commit crimes" and "participated in war propaganda and incitement of hatred towards non-Serb people".

After voluntarily surrendering to the ICTY in 2003, Seselj appeared before judges in November 2005.

He refused to plead, so a not-guilty plea was entered on his behalf. The trial started in 2006, but was halted only weeks later after he went on hunger strike, and then nullified.

A new trial started in late 2007 and proceeded with multiple delays until the closing arguments in March 2012, when prosecutors said Seselj had warned "rivers of blood" would flow in Bosnia if his vision for a greater Serbian state was opposed.

Seselj, who defended himself, accused the Croats of starting the war during the break-up of Yugoslavia, forcing the Serbs to defend themselves.

He has also been handed down three other separate convictions -- including a two-year sentence -- for contempt of court before the ICTY.

He was released in November 2014 on humanitarian grounds and returned to Serbia.

Despite having had surgery for colon cancer, he has stepped up provocative declarations against the ICTY and repeated his inflammatory call for a "Greater Serbia."

Seselj recently declared the tribunal was a "fake anti-Serbia court that is only a NATO instrument aimed at forging historical facts".

During the reading of Karadzic's verdict last week, Seselj led a Belgrade demonstration of some 5,000 people against the court.

"The verdict on Radovan Karadzic is a verdict on all Serb people, all of Serb history and the Serbian nation," Seselj told the crowds.

"He was sentenced while innocent... just because in a crucial historical moment he led Serbs in Bosnia."