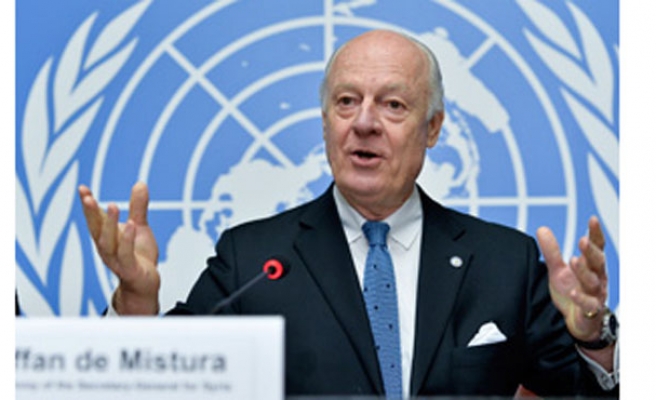 “I can tell you I am urging them for having a paper on the transition and the political transition, and I have already received a pretty good deep paper on the vision from the HNC [the main Syrian opposition group, High Negotiations Committee] on transition,” De Mistura told a news conference in Geneva following separate meetings with regime and opposition delegations on Friday.

“The government is currently focusing so much on principles, which are necessary in any type of common ground on transition, but I hope next week, and I have been saying so to them, that we will get their opinion, their details on how they see the political transition taking place,” De Mistura said, albeit adding that it would not be "conclusive."

"I am looking for a much deeper approach on it in the next round, and that is normal, because both sides need to metabolize it, go back to their own capitals, in the case of Damascus, in the case of the others to consult with their own friends in order to be able to go deeper on that."

Noting that next week would be the last week of the second round of Syrian talks, De Mistura said they would be aiming at “building a minimum common platform of not only principles but points that could lead to a better understanding in what direction we will be going for the political transition," which, he said, would be the main focus of the next meeting in April.

“Remember there will be three additional ones, after which we need to see concrete results. When you compare it to five years of horrible war I think it is quite a short-term ambition, but doable at this stage and certainly where we intend to get,” he concluded.

Syrian opposition negotiator, Bassma Kodmani, said that they had promised a political solution to the Syrian people. “Next year, we will have begun to rebuild Syria, and transitioned to a democratic Syrian state.”

Noting that the issue of detainees held by the Syrian regime was their “red line,” Kodmani reiterated her call to the government to release the detainees and ensure delivery of humanitarian aid.