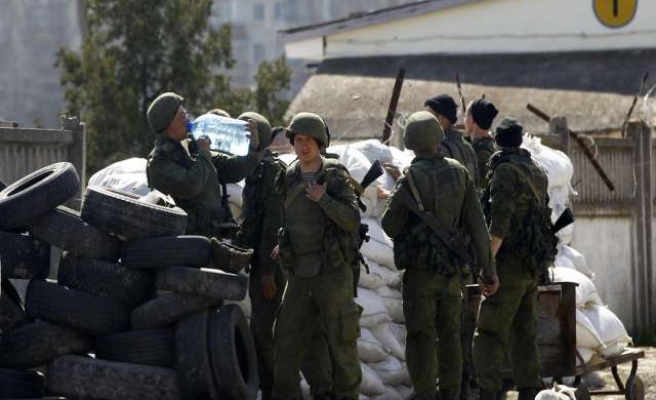 The Pentagon sharply criticized Russia's announcement on Thursday that it was starting military drills near the border with Ukraine and called on Moscow to take steps to lower, not escalate, tensions.

Moscow has said the drills were a response to Ukrainian operations against pro-Russian separatists and NATO exercises in eastern Europe.

"The Russian announcement of additional exercises on the Ukrainian border is exactly opposite of what we have been calling on the Russians to do, which is to de-escalate the situation," Pentagon spokesman Colonel Steve Warren told reporters.

"So we again call on them to act responsibly, to de-escalate this situation and to help all parties bring this crisis to a peaceful resolution."

The Kremlin has built up forces on Ukraine's border, estimated by NATO officials at up to 40,000 troops. It maintains Russia has the right to protect Russian-speakers if they come under threat, a reason the Kremlin gave for annexing the Crimean peninsula in Ukraine last month.

Defence Minister Sergei Shoigu was quoted by the Interfax news agency saying that, starting on Thursday, battalions of tactical groups from the armed forces' southern and western military districts would begin exercises in regions of Russia bordering Ukraine.

"Apart from that, the air force will conduct flights to train for maneuvers along the state borders," Shoigu said.

Speaking to reporters at the Pentagon, Warren said the United States had detected some Russian troop movements that could be associated with those military exercises, including the repositioning of vehicles and personnel.

"We have seen some movement associated with this announcement," Warren said.

Russia's announcement of the drills came a day after about 150 U.S. soldiers arrived for exercises in Poland, part of an effort by Washington to reassure eastern European allies worried by the Russian buildup. Another 450 U.S. soldiers will arrive in the three Baltic states by Monday.

Ukraine has asked Moscow, under European OSCE security arrangements, to explain and give details of its military exercises near the border within 48 hours, the Foreign Ministry said on Thursday.

Meanwhile, Russia on Thursday demanded that the United States force the Ukrainian authorities to halt a military operation in southeastern Ukraine and withdraw units of the armed forces.

Putting the onus on Washington to ease tensions after Ukrainian forces killed up to five pro-Moscow rebels, the Russian Foreign Ministry said the situation "demands urgent actions to force the Kiev authorities, who are wards of the United States, to restrain themselves and not use force".

"We are counting on the United States to take urgent measures in the interests of de-escalation," it said in a statement.

"Washington must force the current Ukrainian leadership to immediately stop the military operation in southeastern Ukraine and withdraw military units to their permanent bases."

"So far, nothing has been done to resolve this urgent task," it said. "We hope that Washington understands the full measure of its responsibility for what is happening."

Telephone talks planned for Wednesday and Thursday between Foreign Minister Sergei Lavrov and U.S. Secretary of State John Kerry had not taken place "for reasons that did not depend on Moscow", the ministry said.

It said that in advance of a conversation between Kerry and Lavrov scheduled for Friday, Russia "once again insistently calls on Washington to use all its influence on the interim government in Kiev" to prevent it from taking steps that could plunge Ukraine deeper into crisis.