Biden, in a statement to the press alongside Poroshenko, said Russian behaviour was a "flagrant violation of the bedrock principles of the international system." 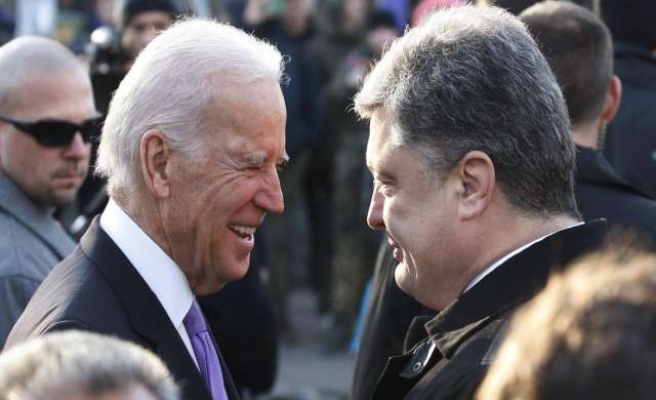 U.S. Vice President Joe Biden on Friday condemned Russia's behaviour in Ukraine as "unacceptable" and urged Moscow to abide by a September peace deal and pull military forces out of the country.

Addressing himself rhetorically to Russian President Vladimir Putin after holding talks with Ukrainian President Petro Poroshenko, Biden said: "Do what you agreed to do, Mr. Putin."

The high-level U.S. visit to Kiev took place with diplomatic efforts stalled on ways of restarting the peace deal signed by Ukraine, Russia and pro-Moscow separatists fighting in the east.

Ukraine and Western powers have accused Russia of backing the separatists and sending in its own troops - allegations dismissed by Moscow.

Both sides have also accused each other of violating the ceasefire and Ukraine said on Friday that its territory had come under cross-border artillery fire from inside Russia for the first time since the truce came into force.

Biden's visit to Kiev took place on the first anniversary of the decision by the government of Ukraine's then president Viktor Yanukovich to ditch a political and trade pact with the European Union in favour of renewed ties with Russia.

The move provoked protests from tens of thousands of Ukrainians and led to the ousting of the Moscow-backed Yanukovich. It triggered the worst confrontation between Russia and the West since the Cold War after Russia annexed Crimea in March and backed the eastern separatists.

Tensions still simmering in Ukraine's war-wracked society came to the surface on Friday when Poroshenko went to pay tribute to the 100 or so protesters who were killed in February by police snipers before Yanukovich fled.

Relatives of those killed, frustrated by the government's failure to bring officials of the Yanukovich government to book, shouted, "Where are their killers?" and "Down with Poroshenko!"

They also attacked him for failing to keep a promise to confer the title of national hero on the victims, which would bring financial benefits to the families of those killed.

Poroshenko later returned to the scene to pledge that he would sign a decree to officially designate the victims, known as the "Heaven's Hundred", as national heroes as promised.

Biden, appearing alongside Poroshenko, said Russia's annexation of the Crimea and backing for the separatists represented a "flagrant violation of the bedrock principles of the international system."

He said the United States would always support a democratic, reformist Ukraine, but he made no specific mention of any fresh military aid which Kiev has appealed for.

A statement from Biden's office said that, pending Congressional approval, the White House would commit $20 million to supporting reform of Ukraine's law enforcement and justice sectors.