What we know about Catalan independence vote

The vote, which has triggered Spain's worst political crisis in decades, was called by regional leader Carles Puigdemont, emboldened after separatists won a narrow majority in the regional parliament in 2015 elections. 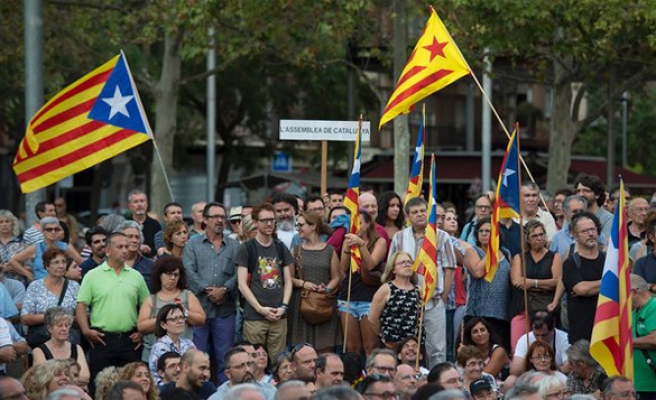 Spanish riot police, some firing rubber bullets, used force to try to stop Catalonia's independence referendum from taking place on Sunday after it was banned by the central government in Madrid.

The people of Catalonia are being asked: "Do you want Catalonia to become an independent state in the form of a republic?".

Whatever the result, the Spanish government does not recognise its legality, deeming it unconstitutional.

The referendum law foresees a declaration of independence within 48 hours of a "Yes" vote. But it is not clear if the regional government will actually do so, given the conduct and conditions of the referendum.

Roughly 5.3 million people are eligible to take part, according to the Catalan authorities, which said that most of the region's 948 municipalities agreed to provide facilities.

However, the Spanish government says police closed most of the 2,315 polling stations on the eve of the vote.

- The response -
Madrid's representative in the region on Sunday urged Catalonia to end what it called a referendum "farce".

It has been ruled unconstitutional by both the central government in Madrid and the courts, with judicial officials ordering police to seize millions of ballot papers, detain key organisers and shut down websites promoting the vote.

Spanish riot police fired rubber bullets and stormed polling stations to prevent the vote Sunday. Many polling stations have been occupied by activists trying to keep them open for the ballot.

Madrid has sent an additional 10,000 agents to the region, including the majority of its riot police, according to El Pais newspaper.

In Barcelona, crowds of people thronged streets outside a polling station chanting "We will vote."

Police visited the Catalan government's communications hub in Barcelona on Saturday, cutting its connections with polling stations and access to software that could have allowed an online vote.

- The region -
With a population of 7.5 million, Catalonia has its own distinct language and culture. Bordered by the Mediterranean and the Pyrenees, the region is about the size of Belgium and accounts for 6.3 percent of Spain's territory.

It is the richest part of Spain, accounting for 16 percent of its population and a fifth of the economic output of the eurozone's fourth biggest economy, buoyed by industry, tourism and research.

But it is also one of Spain's most indebted regions with a debt mountain of 75.4 billion euros ($90 billion) at the end of March, equivalent to 35.2 percent of its GDP.

More than a quarter of the players on Spain's national football team come from Catalonia, which is also the home of Argentine star Lionel Messi's FC Barcelona.

- Why independence? -
Catalonia already has significant powers over matters such as education, healthcare and welfare and its own regional parliament.

Spain's economic doldrums and resentment that the region pays billions of euros more in taxes than it receives in investments and transfers from Madrid have pushed the cause of secession from the fringes of Catalan politics to centre stage.

The regional government argues an independent Catalonia would be richer and better able to protect its language and culture.

In November 2014, Catalonia defied Madrid and held a symbolic vote on independence. More than 80 percent -- 1.8 million people -- voted in favour of independence but turnout was just 37 percent.

The following September, separatist parties secured an absolute majority in the regional assembly and in November, their lawmakers voted for a resolution to kick off the secession process although it was later struck down by the constitutional court.

The most recent poll commissioned by the regional government in July showed 49.4 percent of Catalans were against independence while 41.1 percent were in favour.