Why was doomed Spanish train going so fast?

The train involved, made by Bombardier and Talgo, was a series 730 that Renfe uses for its Alvia service, which is faster than conventional trains but not as fast as the AVE trains that criss-cross Spainat even higher speeds. 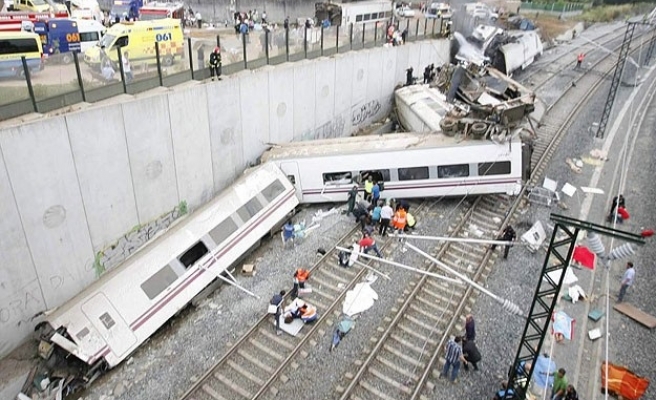 Why was the train going so fast? Did the driver fail to heed speed limits on a sharp curve? Did brakes fail? What about the safety system meant to force the train or the driver to slow down if going too fast?

These are among issues investigators will look into after Spain's worst train crash in decades, which left at least 80 dead and 94 injured, 35 of them in serious condition.

A day after the crash, the driver of the train which derailed on the outskirts of the northern Spanish city ofSantiago de Compostela was under police watch in hospital but had not been arrested.

A judge in the Galicia region ordered police to question the driver, Francisco Jose Garzon, as a suspect and also ordered them to seize the black box of the train.

The 52-year-old driver was a 30-year veteran, said Renfe, the state train company. It has been widely reported that he took a sharp curve with an 80-kmph speed limit at more than twice that speed.

The driver was not available for comment and Reuters was not able to locate his family or determine whether he has a lawyer.

Representatives of railway unions said it was too early to tell whether the driver was to blame.

"Human error is always a possibility, and in defence of human error what do we have, we have technology, that is what it is for ... but it is very difficult to know what might have happened without, for example, hearing what the driver was saying at the time," said Miguel Angel Cillero, responsible for transport at union UGT.

While police and the judge were looking into potential negligence on the part of the driver, the Public Works Ministry launched a more technical investigation. Renfe and Adif, the state track operator, began their own probes.

Security video footage showed the train, with 247 people on board, hurtling into a concrete wall at the side of the track as carriages jack-knifed and the engine overturned.

The impact was so strong that one carriage of the train flew over a wall and landed on an embankment several metres above.

The train involved, made by Bombardier and Talgo, was a series 730 that Renfe uses for its Alvia service, which is faster than conventional trains but not as fast as the AVE trains that criss-cross Spainat even higher speeds.

The train is designed to operate on conventional and high-speed tracks that make use of two different types of safety systems that are meant to regulate excessive speed.

On high-speed lines, trains use the European Train Control System, or ETCS, system, which automatically slows down a train that is going too fast.

On slower lines, trains operate under an older system called ASFA, a Spanish acronym for Signal Announcement and Automatic Braking, which warns the driver if a train is moving too fast but does not automatically slow it down.

At the site of the disaster, just 3 km before reaching the Santiago de Compostela station, the train was passing through an urban area on a steep curve. At that point of the track, two railway experts said, it uses the older ASFA safety system.

Professor Roger Kemp, a Fellow of the Royal Academy of Engineering in Britain, said in an e-mailed comment: "As the driver was leaving the high-speed line to join a much slower route before entering the station, there must have been at least prominent visual warnings to reduce speed, if not audible warnings and an electronic speed supervision system."

Local media reported that railway union representatives had questioned whether a high-speed train should have been adapted to run on a track with curves that had been designed for lower-speed trains.

A source close to ADIF said the safety system was apparently working correctly and a train had passed an hour earlier with no problems.

The train, packed with families visiting relatives and revellers on their way to a major religious festival, was not running late.

It began its seven hour journey to the northern region of Galicia right on time: at 15.00 CET on the dot. It crashed at 20.41, two minutes before it was due to arrive.