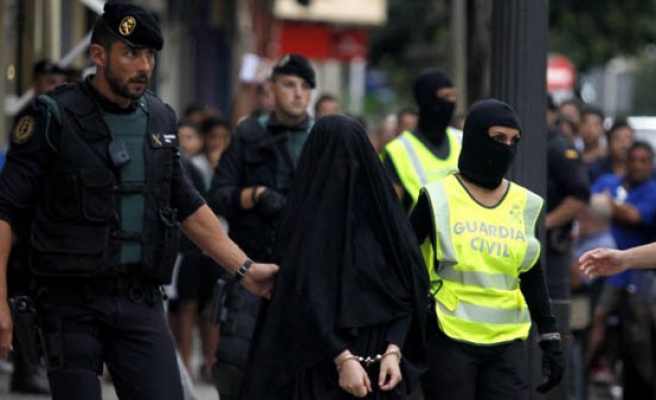 She was the latest in a series of suspected IS sympathisers detained in Spain since last year over security concerns.

Police led the woman from her home in the town of Gandia near Valencia whilst arrmed officers stood guard outside her door and others in balaclavas carried away boxes of evidence from inside.

Police said she was suspected of recruiting other women via the Internet to the group, which has claimed numerous kidnappings and executions.

At the time of her arrest, the suspect "was making the last preparations for her journey" to Syria, a police statement said.

She was not the first woman arrested in Spain for allegedly recruiting women and girls for the armed group, after another was detained on the island of Lanzarote in July.

Police said the woman detained Saturday was Moroccan but had lived for a long time in Spain.

Officers arrested her "for suspected links with terrorist activities," the statement said.

"She spread ideology on the Internet, justifying terrorist acts and spreading videos that glorified executions of people," it said.

"She had focussed her online activity on recruiting women to go and swell the ranks of ISIL."