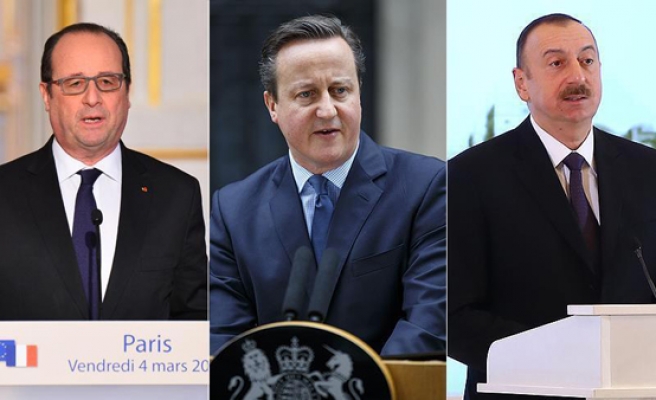 Leaders from all around the world expressed their outrage at the deadly car bomb attack in Turkey’s central Kizilay neighborhood, which left 34 people dead and 125 others injured.

"This afternoon, the center of Ankara was yet again a target of a bomb attack, with dozens of lives lost and many injured. We express our strong solidarity and fullest sympathy with Turkey, its government and its people. We extend our deepest condolences to the families and friends of those killed in this terror attack and wish a speedy recovery to all injured," it said.

"The European Union will continue to stand by all those who suffer from such violence. We reiterate our firm commitment to further step up international cooperation to fight the global threat of terrorism," it added.

Council of Europe Secretary General Thorbjorn Jagland tweeted his condolence, saying the attack was against values of Europe.

Meanwhile, U.K.’s Minister for Europe, David Lidington, said: "Appalled by today's atrocity in Ankara. Heartfelt sympathy for victims and their families. U.K. will stand by Turkey in face of terrorism".

U.K.’s Secretary of State Philip Hammond said: "My thoughts and deep condolences to everyone affected by today's Ankara & ‪IvoryCoast terror attacks. Both appalling attacks on civilians​".

French President Francois Hollande condemned the attack in a statement issued by Elysee. “The President addresses to the Turkish people a profound message of solidarity after the despicable attack which struck central Ankara tonight causing many casualties.

“France is by Turkey's side to continue with its fight against terrorism that hits everywhere and must be fought with the utmost powers,” the statement said. ​

“Turkey has been again hit in the heart of the capital Ankara, by a barbaric terrorist attack that left many victims.

"France condemns in the strongest terms this heinous act reminiscent of how the international community must be united, united and determined to face the terrorist threat," Ayrault said.

“There can be no justification for such heinous acts of violence. All NATO Allies stand in solidarity with Turkey, resolute in our determination to fight terrorism in all its forms," Stoltenberg said.

Georgian Prime Minister Giorgi Kvirikashvili said: "I share the sorrow of 'our friend' Turkish people. I would like you to know that the Georgian people are standing by you in these sad moments".

The newly-elected president of Kosovo, Hashim Thaci, wrote on social media that the bomb attack has hit the friendly Turkish people and state.

Albanian Foreign Minister Ditmir Bushati said: "Terrorism has again hit Ankara. Our thoughts and prayers are with the families of the victims. We support Turkey".

"I'm appalled by the devastating terror attacks in Ankara and the Ivory Coast. My thoughts are with all those affected," British Prime Minister David Cameron said.

Austrian Foreign Minister Sebastian Kurz tweeted: "My thoughts are with the victims' families and friends".

Serbian Prime Minister Aleksandar Vucic said in a telegram: "Once again, I want to reiterate the importance of joining efforts and forces in determined fight against terrorism that continuously jeopardizes and undermines values of modern civilization and society".

Greek Ministry of Foreign Affairs said in a statement: "We unequivocally condemn terrorism, whatever its source, and we express our solidarity with the Turkish people and the citizens of the Turkish capital, as well as the deep condolences of the Greek people and the Greek government to the families of the victims".

Azerbaijan President Ilham Aliyev in a statement voiced his grief over the death of scores of people in the incident.

"We severely condemn terrorism and we think the fight against terror must be conducted in the harshest way," Aliyev said.

Aliyev offered condolences to the Turkish people and families of the victims, expressing a wish for the speedy recovery of the wounded.

U.S. Ambassador in Ankara John Bass tweeted: "Deeply saddened and horrified by attack in Ankara. We extend our deepest condolences to victims and their families".

"The prime minister extends his heartfelt condolences to the people and government of Turkey and prayed for eternal peace for the departed souls as well as swift recovery of those who have been injured," Sharif said in a statement.

Israeli Prime Minister Benjamin Netanyahu also condemned the Ankara attack. "Israel expresses solidarity with the Turkish people in the war against terrorism and calls on the international community to unite in the fight against terrorism".