Yanukovich has been put on the international wanted list

Ukraine's new authorities say that Yanukovich is wanted for 'mass murder' connected with the shooting deaths of protesters during the crisis. 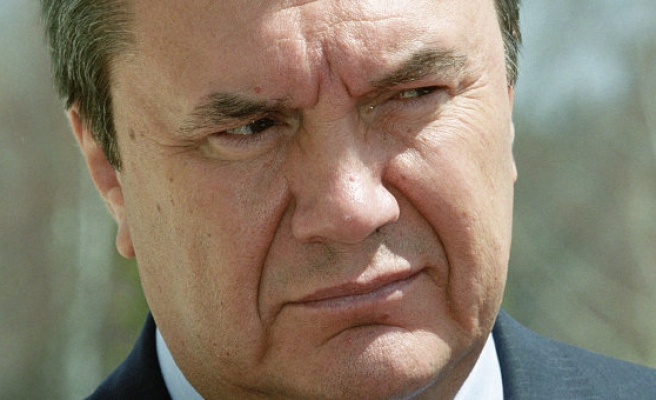 Ukraine's new authorities say that Yanukovich, who was ousted by parliament on Saturday after three months of street unrest and has gone into hiding, is wanted for 'mass murder' connected with the shooting deaths of protesters during the crisis.

Ukraine also will urgently contact international organisations with an official request to help trace bank accounts and assets controlled by ousted President Yanukovich and his allies, the acting prosecutor general said on Wednesday.

Accusing Yanukovich and his aides of stealing "not millions but billions" of dollars, Oleh Makhnytsky announced he had ordered police and intelligence agencies to draw up a list of foreign accounts held by Yanukovich's aides and their connections.

"We are preparing today the requests to international organisations to find the accounts," he said.

Makhnytsky also said that every economic deal concluded in the four years of Yanukovich's presidency would be carefully re-examined for possible corruption.

"We will check everything: all the schemes of the ex-regime." Without pre-judging the investigation, if illegal deals were found then they would be reversed, he said.

"We are doing these checks because all the acivity of the former regime was built on total corruption."

Officials who he said were under investigation included former prime minister Mykola Azarov and Yanukovich's chief of staff, Andriy Klyuev.

The announcement came as European Union officials prepared sanctions against leading figures in the ousted leadership.

U.S. authorities warned banks on Tuesday to be on the look-out for potentially suspicious transfers of financial assets by members of Yanukovich's circle.

After the discovery of a lavish presidential retreat at Mezhyhirya outside Kiev - complete with private golf course and pet zoo - and other luxury retreats around the country, there is a widening anger and suspicion in Ukraine that Yanukovich and his associates may have taken a substantial slice from major public contracts.

Underlying the unstable situation in Ukraine, Makhnytsky's official office in Kiev appeared unguarded except for militia armed with baseball bats when visited by Reuters.

The revolutionary air hanging over the city was underscored by a sole protester smashing his way through glass doors at the building's reception area. He was removed by the militia.

In the interview, Makhnytsky said the Yanukovich government had close ties to leading figures in business so prosecutors would examine "very intensively" items in the state budget, tenders by the state, and the fuel and gas sector.

With searches under way in all the former residences of the ex-President, Makhnytsky said national authorities would look for all traces of international bank accounts or companies associated with regime figures.

Asked whose assets he was seeking abroad, the prosecutor said Ukraine was seeking to find the assets of Azarov, Klyuev, ex-interior minister Vitaly Zakharchenko and members of Yanukovich's family.

He also named one prominent businessman, Serhiy Kurchenko, who he said was closely tied to Yanukovich. Investigators had already found 685 million UAH (about $60 million) of suspicious transactions in his accounts, he said.

Kurchenko could not be immediately reached for comment and is believed to have left the country.

He said: "We know only the first draft of this list, which contains very prominent and well known names. We of course sent this draft to the Financial Market Authority and the Interior Ministry so that no time window opens for these people until the final decision by the European Union."