Finance Minister Bruno Le Maire had warned Sunday that the protests sweeping France were a "catastrophe." 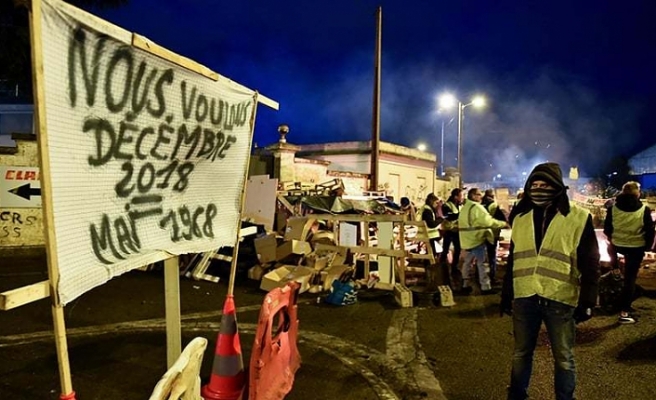 The Bank of France on Monday slashed its fourth quarter growth forecast in half, to 0.2 percent from 0.4 percent, citing the impact of the "yellow vest" protests which have rocked the country.

"Services activity has slowed under the impact of the movement. Transport, the restaurant and auto repair sectors have gone backwards," the French central bank said in its latest company survey.

The Bank of France's latest estimate for the three months to December is well short of the 0.8 percent that would be needed to meet the government's 2018 growth target of 1.7 percent.

The French economy expanded 0.4 percent in the third quarter and 0.2 percent in both the first and second, according to official statistics.

Le Maire, speaking earlier on RTL, said he expected the protests to cut fourth quarter growth by 0.1 percentage point but refused to comment on a possible downward revision of the full-year 1.7 percent figure.

"I am not going to revise the figures for the moment but we will certainly have 0.1 percentage point less growth at the end of this year," he said.

"That cannot be made up. That is the reality -- for commerce, small business owners who have seen their shops damaged, vandalised, looted," Le Maire said.

"That is also the reality for the foreign investors who are looking at us... I see already the impact that has abroad and it is not good for (image) of our country," he added.