At a roundabout in the southern town of Le Boulou, some 150 "yellow vests" gathered around a loudspeaker listened carefully to the president's words before starting to shout in chorus. 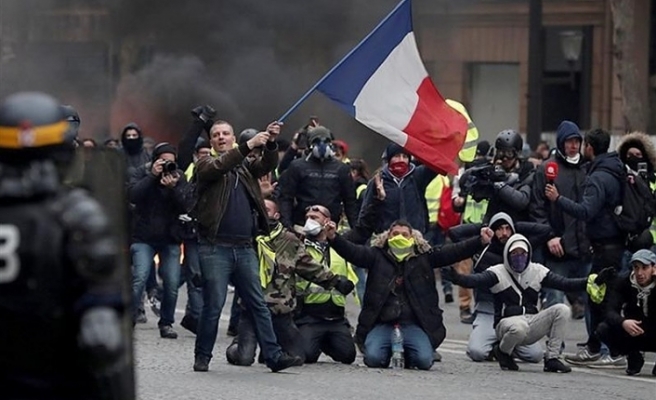 Groups of "yellow vest" protesters across France responded scathingly to the "crumbs" offered by President Emmanuel Macron in a speech intended to defuse their revolt, but others acknowledged his efforts.

"Nonsense," "a charade", "a bluff" and "a drop in the ocean," were among the immediate reactions that greeted the head of state's televised speech Monday evening announcing an increase in the minimum wage and a range of other financial measures.

"He is trying to do a pirouette to land back on his feet but we can see that he isn't sincere, that it's all smoke and mirrors," said Jean-Marc, a car mechanic.

"It's just window dressing, for the media, some trivial measures, it almost seems like a provocation," said Thierry, 55, a bicycle mechanic who donned the yellow vest a fortnight ago.

"All this is cinema, it doesn't tackle the problems of substance," he told AFP before taking part in blocking the Boulou turnpike on the French-Spanish border.

"We're really wound up, we're going back to battle," he said.

Less than an hour after the presidential address, the A9 toll booth from Spain was completely paralysed, an AFP photographer said.

"Maybe if Macron had made this speech three weeks ago, it would have calmed the movement, but now it's too late," said Gaetan, 34, one of the "Rennes Lapins Jaunes" (Yellow Rabbits of Rennes). "For us, this speech is nonsense."