On 8 May 1945, French army troops with machines guns opened fire on a crowd, killing hundreds of people. 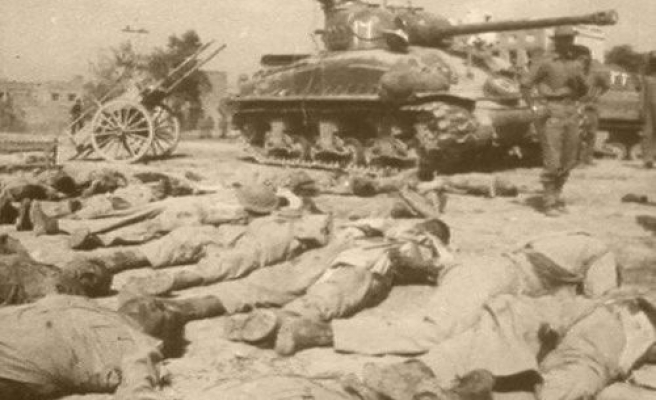 On 8 May 1945, French army troops with machines guns opened fire on a crowd, killing hundreds of people. This was followed by intense bombing by French aircrafts in Setif, neighboring Guelma and nearby villages. According to Algerian sources, by the end of the massacre on 22 May, 45,000 Algerian civilians had been killed.

Upon seizing an Algerian city in 1830, the French embarked on a campaign to colonise the entire country. This marked the beginning of 130 years of Algerian enslavement.

In response to French colonization efforts, the Algerians established several anti-colonisation resistance organisations. The most important of which being the resistance movement of Abdelkader El Djezairi. However, in an attempt to break down Algerian resistance and pro-independence support, French occupation forces placed the Algerians under military, political, religious, cultural and economic pressures.

Cultural pressure was applied with the intention of eliminating Muslim and Arab identities. Attempts were made to replace Arabic and Berber -the official languages of Algeria-with French. Religious pressure was applied with the intention of replacing Islam with Christianity via an increase in Christian missionary activities. Land belonging to tribes who were deemed ‘anti-occupation’, was confiscated in a bid to apply economic pressures and non-transferable properties belonging to foundations that were set up to serve the society were seized. Europeans migrants were also settled into colonial settlements in the country's most beautiful regions. In order to encourage such migration, land was seized from native tribes and distributed, without cost, to European migrants.

Algerian rebellion against political repression and massacre led to brutal suppression at the hands of the 400,000 French soldiers whom had been deployed to the country. Hundreds of thousands of people were killed. Following the genocidal massacre, France gained entire control of Algeria. Although this was only achieved in the 1900’s, from this point onwards, hundreds of thousands of French citizens settled in Algeria.

At the start of World War II in 1939, France was briefly occupied by the Germans. During this period, the Algerians fought against Hitler alongside the French and under the French flag, with the belief that following the war they would be granted independence. On 8 May 1945, the Allies were winning the war and Germany withdrew. Celebrations marking the end of the war were held in Europe and similarly in Algerian Setif. Thousands of Algerian’s in Setif marched with Algerian flags and placards written ‘Long Live Freedom and Independence’. Marching song of independence could also be heard.

However, the French administration reacted harshly to such demonstrations. France wanted the system established since 1830 to continue. French army troops with machines guns opened fire on a crowd, killing hundreds of people. This was followed by intense bombing by French aircrafts in Setif, neighboring Guelma and nearby villages. Martial law was declared in the country. Thousands of people were detained and executed without questioning. According to Algerian sources, by the end of the massacre and arrests on 22 May, 45,000 Algerians had been killed.

The massacre witnessed in Algeria led to an increasingly violent reaction amongst its citizens. During this period, pro-independence movements began to emerge once again. Between the years of 1948-52 preparations for revolt against the occupation took place. The Movement for the Triumph of Democratic Liberties (MTLD) was founded under the leadership of Messali Hadj and in 1950, the movement was active against French rule. However, discontent amongst members with regards to the leadership of Messali Hadj and his peaceful democratic methods resulted in the formation of a break away group named National Liberation Front (Front de Libération Nationale-FLN). On 1 November 1954 FLN militants launched a series of attacks on military facilities, warehouses, communication systems and public enterprises across Algeria.

The Algerian War of Independence had officially begun.