Literally meaning 'Star Taker', the name may originate from the Greek terms Astron Lambanein. Others associate it with the Persian terms Sitara Yab, whereas in the Arab world it was literally translated into Akhdh al-Kawakib. 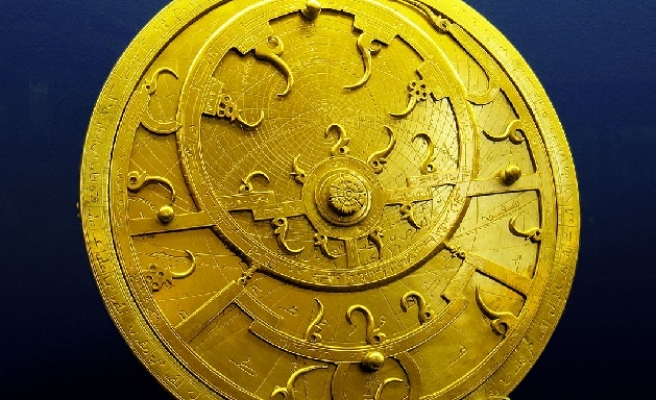 What is small enough to fit in your pocket and comes with over 1,000 applications? In this modern day and age, the first thing that would come to one's mind on being asked this question would no doubt be a smart phone. However, as much as the smart phone may be a new invention, the concept of a practical handheld multi-purpose device is something that has been with us since ancient times.

With the wide range of applications that can be downloaded to smart phones today, smart phone users have the opportunity to personalize their devices according to their own interests, hobbies and lifestyle. For Muslims in particular, this has given rise to many applications such as digital Qur'ans, prayer time calculators, call to prayer alarms and even compasses that point to the direction of Mecca. Likewise, this act of personalization is also nothing new.

As early as 150 B.C.E., scientists, astronomers, navigators and astrologers were using a handy device called an 'Astrolabe'. Its primary purpose was to predict the positions of the Sun, Moon, planets and stars. Literally meaning 'Star Taker', the name may originate from the Greek terms Astron Lambanein. Others associate it with the Persian terms Sitara Yab, whereas in the Arab world it was literally translated into Akhdh al-Kawakib. It is believed that it was invented by ancient Greek pioneer Hipparchus, and suggested that Ptolemy used it to make the observations he recorded in the Tetrabiblos.

However, after the seventh century, while Europe was in the onset of its Dark Ages, the Muslim Arabs inherited the knowledge of the ancient Greeks, translating their books into Arabic as well as learning the Greek language themselves. At the same time, they did not just accept Greek knowledge and philosophy as it was. Rather they questioned it, challenged it, debated it, and in doing so, the Muslim Arabs ultimately improvised on it. The Astrolabe was no exception, as the Arabs began to adapt it to meet their needs. They incorporated methods to calculate the prayer times as well as pointing to the Qibla (the direction of prayer).

They also developed different styles, such as the spherical Astrolabe, which is attributed to Al-Nayrizi in the late ninth century, as well as that, the linear Astrolabe was invented by twelfth century scholar Sharaf al-Din al-Tusi. In 1235, Abu Bakr al-Isfahani introduced the first geared mechanical Astrolabe. For centuries, the Astrolabe became a Muslims' best friend, and a Muslim would not embark on any long journey without it.

While the Astrolabe may not be as fancy as the gadgets we have today, it was by far a technological advancement way ahead of its time, which could be argued to be the source of our curiousity in the multi-purpose smart phones of this age. Notebly, all of the functions of the Astrolabe have been incorporated into applications for our smart phones.