I will explore the phenomenon of transnational traditionalist madāris in Britain by analysing three periods; madāris in pre-colonial India, in colonised India, and post-colonial Britain.... 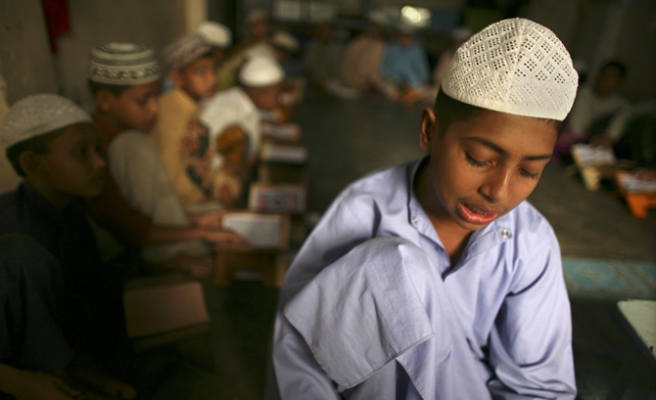 At the conference ‘Our Mosques, our Future’ which took place in Hounslow on the 21st of October 2008, Tim Winter (Abdal Hakim Murad) delivered a presentation on the lack of Islamic leadership in the United Kingdom as opposed to the United States, who boast the likes of Sirāj Wahhāj, Zaid Shākir, Hamza Yūsuf, ‘Umar ‘Abdullāh and other significant scholars who have huge followings not just amongst the intelligentsia, but at the grassroots of the community. Winter insisted that there must be something lacking with the madrasa sector and elaborates:

‘…It is an interesting fact that there are twice as many Muslims training as Imams in this country as there are Christians of all denominations training for Christian ministry. It’s kind of an over population. There are at least twenty institutions now as far as I can see that are doing it, but as yet we have not found the one leader, who can lead cheering crowds in Trafalgar Square, who can galvanise teenagers and lead them in the direction of something that is mainstream, normative and convivial Islam – that individual has not yet appeared. So something needs to be done in that sector as well if we are going to build this thing we want which is the positive outwardly oriented 21st century Mosque…’[1]

As, Winter believes that the number of Imams currently under training exceeds that of Christians in Christian ministries and describes it as ‘a kind of an over population’. Firstly, it is essential here that one must explore and define the nature and purpose of leadership that the madāris are providing. Is it really to ‘cheer the crowds at Trafalgar Square’ as Winter insists, to produce orators who speak to Mosque congregations already practising their faith or to provide Mosques with men who can lead the congregational prayers? The question is whether the ṭālibs studying at the madāris themselves are aware of the role they must play in wider society or what the wider society expects from them.

I will explore the phenomenon of transnational traditionalist madāris in Britain by analysing three periods; madāris in pre-colonial India, in colonised India, and post-colonial Britain. I will focus specially on dars-e-niẓāmī pedagogy and how this may influence the thought process of the madāris Part of my methodology was to interview and discuss contemporary issues with fāḍils (madrasa graduates) as opposed to ṭālibs (madrasa undergraduates), all of which have been provided in Appendix 1. I have taken much from Sikand, as he has researched the madāris of India much and has a profound understanding of transnational Islamic movements and is proficient in all sub-continent languages. Metcalf is instrumental in portraying the image of colonised Musalmāns. I benefitted from Zaman’s exploration of the mind and ideology of the ‘ulamā’ and finally for ethnography and fieldwork I relied on the works of Gilliat-Ray and Alam and changed my method of approach from ṭālib to fāḍil, which I will elaborate. In my work I have focused thouroughly on three aspects not covered and seen as whole, and examined how they influence madāris here in Britain: the history that has constructed the syllabus; the history and response of a specific madrasa to the media; and an analysis of criticism and reform history of the madāris of Britain

To understand the madāris in Britain it is essential that the study begins in medieval Hind (India) and an analysis of the context to which the madrasa was a response or a number of contexts that today defines the outlook of Madāris (pl. of madrasa). Gilliat-Ray too insists that the study ‘has to be set against a canvas of responses to colonialism, and the founding of ‘seminaries’ in India in the mid-1800s’.[2] The seminary at Deoband further expanded and saw a vast increase in madāris that claim allegiance to Deoband, they too have to be seen in context:

‘Deoband was intended to resist the British by non-violent methods, the military option having been tried fruitlessly in 1857. But the Mazahir-i-‘Ulum had since its very inception opted out of this worldly (dunya); it had remained committed only to the faith (dīn)’.[3]

In the UK the Dār al-‘Ulūm al-‘Arabiyyah al-Islāmiyyah (Bury madrasa) and Jāmi’at ta’līm al-Islām (Dewsbury madrasa) are considered the ‘Oxbridge’ of the traditional madrasa world. These have their foundations not directly with Deoband, but through its expanded seminaries, namely Maẓāhir-e-‘Ulūm (Saharanpūr) and Niẓam al-Dīn (Tablīghī Jamā’at HQ at New Delhi). Here we seek to explore the civilizational modes that nurtured their mother institutes as, Winter explains: … ‘the traditional madrasa curriculum (the dars-e-niẓāmī) and allied curricula are in fact extraordinarily brilliant articulations of Islam in a particular civilizational mode…’[4] It is for this reason essential to begin with a brief history ofmadāris and their curriculum (dars-e-niẓāmī) in Hind and how Mughal India and British colonialism influence Madāris today in the modern world.

Very little is actually known about the medieval madāris of Sind, Multan and Ajmer but our attention is drawn to 1258 and the Mongol destruction of the Abbasid Caliphate. The incident of 1258 saw vast numbers of refugees seeking refuge in Hind and among them were ‘ulamā and ṣūfis, the former who brought with them major ḥanafi texts, and the trend of producing commentaries of the texts and then commentaries of commentaries further ensured insistence ontaqlīd of the earlier ḥanafī ‘ulamā’. And as I believe, this left no room from a critical analysis of the texts being studied. Sikand suggests that due to this notion ‘the ulamā’ failed to develop a system of jurisprudence grounded in the particular context of India, where Muslims were a small minority’.[5] However, it was then that a systematic curriculum was founded in Hind.[6] I will further elaborate on why I am convinced that the dars-e-niẓamī syllabus and pedagogy, too play a significant role in the madrasa thought process. However, the ‘ulamā’ in medieval India were employed in the state bureaucracy in various capacities, as judges, experts in offering legal opinions, censors of public morals, preachers and teachers.[7] Leading ‘ulamā’ thus enjoyed close relations with the state.[8]

The Deobandi academic journal ‘Māhnāmah Dār al-‘Ulūm Deoband’[9] elaborates how the history of ‘the system of Muslim education in India’ is divided into four stages by Mawlānā ‘Abd al-Ḥayy Lukhnawī. In his article ‘Hindustān kā qadīm niṣāb-e-dars awr us ke taghayyurāt – India’s medieval system of education and its modification’, Lukhnawī begins with dawr-e-awwal, the first period – 7th Century A.H. to 9th Century A.H. This period saw the founding of the following subjects: naḥw (Arabic grammar), ṣarf (etymology), adab wa balāghat (rhetoric and literature), fiqh(jurisprudence), uṣūl-e-fiqh (principles of jurisprudence), manṭiq (logic), kalām (cosmology), taṣawwuf (Sufism), tafsīr(Qur’anic exegesis) and ḥadīth (traditions of Prophet Muḥammad).[10] In this period fiqh was considered to be the most significant subject, and it was deemed sufficient to merely study Mashāriq al-Anwār[11] or Maṣābīḥ[12] forḥadīth. This heavy influence of fiqh is believed to be the influence the conquerors of Hind had on the land, as they were from Ghaznī and Ghawr – both lands that prided themselves with the study of fiqh.