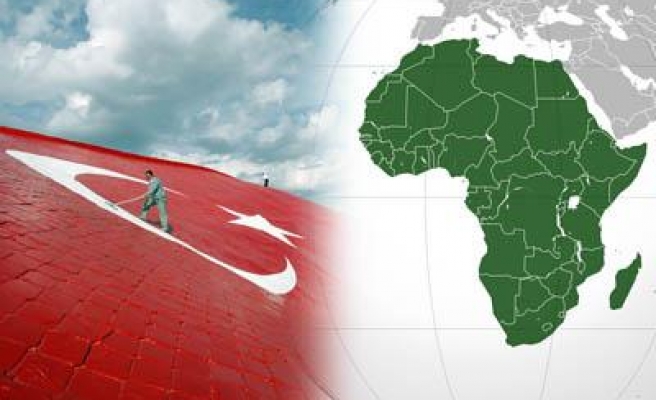 In order to accelerate the political, military, cultural and economic relations with African countries, in 1998 within its multi-dimensional foreign policy, Turkey has created an “Opening to Africa Action Plan.” In this context, at the beginning of 2003 “Development Strategy of Economic Relations with African Countries” was prepared by the undersecretariat of foreign trade.

2005 was declared as the year of Africa in Turkey. Turkey, on 12th April 2005 was awarded the status of observer country of the African Union. Then in 2008 at the African Union Summit, held in Addis Ababa, with a common agreement Turkey was announced as the strategic partner of the union.

In this process, with the “Turkey- Africa Cooperation Joint Implementation Plan” accepted in

December 2010 covering the years 2010-2014, the relations with the continental countries gained a new momentum. During the process, there was an increase in the high-level visits towards the continent.

Turkey's relations with the African Unity Organisation looking at the period between 1963 and 2002 was limited. Turkey, after this period with the opening policy has gained the status of observer country in 2005. In 2008, the African Union by accepting Turkey as the strategic partner of Africa has took an important step in development of relations with Turkey.

Shortly after this, the Turkey-Africa Cooperation Summit was held in Istanbul on 18th - 21st August 2008. In this context, being a temporary member of the UN Security Council it the period 2009-2010 Turkey has endeavoured to make the African continent's voice to be heard on the international arena. This goodwill gesture of mutual trade has increased the political and economic relations  exponentially. In 2014 the trade volume with African countries have passed 25 billion dollars.

Turkey, as well as political and economic relations, has increased cultural and social relations as soft power. Turkish Airlines, has increased its effectiveness in Africa as one of Turkey's soft powers.  While the number of locations reached in the 2000s were four in Africa it became 46.

Since 2011, the Turkish Red Crescent continues to operate effectively in Africa. Niger, Chad, Cameroon and Central African Republic are countries included to the activity field of the Red Crescent. Besides health, Red crescent also provides shelter services in Africa. Just in Somalia, 25 thousand people take shelter in the tent city established by the Red Crescent.

The Prime Ministry Disaster and Emergency Management (AFAD) is one of the most effective organisations in Turkey. AFAD is helping nearly 100 thousand people that are affected by floods, drought and civil war. The educational and cultural relations between Turkey and Africa is growing more and more each day. Prime Ministry Presidency For Turks Abroad and Related Communities is providing scholarship for over 3 thousand African students that want to study in Turkey.

Bilateral relations in the field of media also continues. On the TRT (turkish national television) website, broadcasting in the Svahili and Hausa languages, widely spoken local African languages, was initiated. The Anadolu Agency is trying to reach Turkey with the African news by using its French section based in Tunisia.

Turkey is in close monitoring

North African countries; Egypt, Libya and Tunisia are the 3 countries that holds an important place in Turkey's African politics. Turkey is carefully monitoring what happens in these countries for the past 4 years. Established extremely close relations with Egypt after overthrow of the Mubarak regime and Muhammed Mursi came to power and responded vigorously to the coup by General Sisi.

Continuously made agenda of the violations of human rights in the country and the repression against the Muslim Brotherhood movement. Today, the tension between the two countries continues. Turkey is following a conciliatory line in its politics towards Libya, that couldn't catch the stability after the Gaddafi government. Gives a clear support for the international community's efforts to find a solution to the political crisis in Libya.

In this context, an effective policy is followed on the dialogue process between Tobruk based representatives and Tripoli- centred National General Congress. At the end of the ongoing negotiations to end the crisis in Libya, “Libyan Political Agreement” was signed between the Libyan parties, in the city of Suheyrat in Morocco. Referring to the importance of the agreement, Foreign Minister Mevlut Cavusoglu said that they have witnessed a historic moment for Libya.

Cavusoglu mentioned that the agreement is very important for the future, security and unity of Libya. He added, with this agreement a temporary government was established but the actual process has only began and that they will continue to try and convince the important people from the sides that didn't participate to the agreement. Cavusoglu emphasised the point that Turkey will at all times continue to be next to the Libyan people. These words were also a summary of Turkey's policy towards Liby

Turkey is the leading country to support Tunisia after the revolution. Bilateral relations based on the historical experience in the new era is progressing extremely positive. Tunisia – Turkey relations after the revolution has reached significant levels led by the Nahda Movement. Rasid Gannusi's efforts holds an important place in Tunisia finding Turkey as a supporter to help for everything needed.

Recep Tayyip Erdogan's message at the visit he gave to Tunisia after the revolution, that they are ready to provide assistance needed for the democratic progress in Tunisia, has helped to speed up the Turkey – Tunisia relations. Turkey seeing Tunisia as an important gateway for African relations increases the importance of bilateral relations.

The increasing importance of Africa each day in the global economic competition has made Tunisia a country that needs to be taken as a regional alliance the most. Turkey's relations with Tunisia is of great importance to break the Southern Europe and France's Mediterranean dominance over Tunisia and the Maghreb countries.

East African countries have an important place in Turkey's Africa policy. Relations with these countries are mainly carried out through the east African community. Tanzania, Kenya, Uganda, Rwanda and Burundi are members of the organisation that aim to extend and deepen the political, economic and social matters for the benefit of the member states.

Out of the East African countries Somalia is having most intensive relations with Turkey. While Somalia was having very difficult time because of famine and illnesses, Turkey has launched a national and international campaign to help. Millions of dollars were contributed to Somalia by Turkey calling the international community to act. Diplomatic operations are continuing to help solve the conflict between Somalia and Somaliland.

Other countries led by Turkey, including the UN and the Organisation of Islamic Cooperation and other aid organisations making efforts to help Somalia. Somalia today is still dealing with problems arising from the wounds of the civil war, inadequate infrastructure and weak central government.

Turkey's operations in Somalia, is also seen as an opportunity to deepen relations with other African countries. In this context, Africa proclaiming Turkey as “Strategic Partner” in 2008, the relations with African Union is developing.

The Efforts in West Africa and Sub-Saharan Africa

On 19-21 November 2014, the second Turkey-Africa Summit, held in Malabo, the capital of Equatorial Guinea was a sign that Turkey in entering a new era in African politics. With this meeting, the relations between Turkey and Africa was transformed into strategic partnership.

TIKA opened one of its offices in Ethiopia and carried out over 200 projects through this office. Turkey has also took initiative and made efforts to end the crisis between Ethiopia and Sudan from the issue of sharing Nile waters. Relations between Turkey and Ethiopia is shown as an partnership example to other African countries.

Most powerful relationship of Turkey in West Africa is with Senegal. Turkish companies have played an important role in the development of the country by doing large number of investments.

Relations between Turkey and the Ivory Coast have peaked with the election of El Hasan Attara as the president.

Cameroon is one of the African countries in which Turkey's relations is recently developing with. Cameroon has opened its doors to Turkish businessmen by accepting Turkey as a strategic partner.

Turkey continued its relations with Africa not only through economy but also education and military affairs. For example, an intense effort was given to end the instability in Burkina Faso. Financial aid was made in order for presidential elections to be made in Burkina Faso.

Playing the mediator role between the Muslims and Christians in central Africa during the internal conflict, Turkey continues its intensive work for the peace to occur. Turkey provides educational support to many countries in the fight against terrorism in Africa. The Turkish police and military worked in Somalia and Gambia for education purposes.

In the 2000s, the trade volume between Turkey and sub-Saharan African countries have reached from 742 million dollars to 22 billion dollars. While in 2002 the sub-saharan countries formed the 2 percent in imports, in 2009 this figure have rose to 9 percent. The number of projects undertaken by Turkey is almost 1250. The value of these projects is at 54 billion dollars.

Turkish International Cooperation and Coordination Agency TIKA, operates in 28 countries in Africa. Aids are made according to the needs of each country. Since the year 2011 the Agency have donated 315 million 391 thousand dollars for development aid to the continent. The aid given to the continent only in 2014 is 26 million 632 thousand dollars.

TIKA gives more importance to the improvement of water and environmental conditions in its activities in Ethiopia. 40 percent of the aid is directed to this are and close to 35 percent is spent on social infrastructure.

From the activities of the agency in Kenya health stands out the most. Also the development of administrative and civil infrastructure is amongst the activities TIKA gives importance to in Kenya. The Agency also gives assistance to Kenya in social infrastructure and services, livestock, communication and education.

Giving most assistance to Libya in the health sector, another focus of TIKA in the country is livestock. The agency is also showing activities in communication, administrative and civil infrastructure, education and social infrastructure in Libya.

In Niger, TIKA is operating mostly in the fields of social and infrastructure services and  improvement of water and environmental conditions. As well as health, education, administrative and civil infrastructure, the forestry and communication sectors are also supported by TIKA.

One of the countries TIKA is most active in Africa is Senegal. 35 percent of the aid The Turkish international Cooperation and Coordination Agency does to Senegal is on education, 25 percent on health, near 19 percent on farming and 8 percent on water and environmental improvement. Improvement of administrative, civil and social infrastructure, communication sector and forestry are areas TIKA helps.

70 percent of the aid to Somalia is taking place in economic infrastructure, while close to 23 percent in the health sector. TIKA is helping Somalia in the fields of administrative and civil infrastructure, education, social infrastructure, agriculture and improvement of water and environmental conditions.

Another country where Turkish international Cooperation and coordination Agency operates is Sudan. 35 percent of the aid made to Sudan was on social and infrastructural services, 30 percent of it on health, 12 percent on improvement of water and environmental conditions and 12 percent on the filed of education. TIKA also operates in Sudan in the fields of agriculture and livestock, administrative, civil and economic infrastructure.

Almost all of the activities of TIKA in Tunisia is on the improvement of administrative, civil and economic infrastructure. Health, education, production and social infrastructure are the areas TIKA is aiming in Tunisia.

TIKA's activities in Yemen are concentrated in the areas of education and health. The agency made half of the aid in the field of education and 23 percent of it in the health sector. As well as the development of civil and social infrastructure, communication, production, water and improvement of the environmental conditions are the other areas TIKA functions in Yemen. 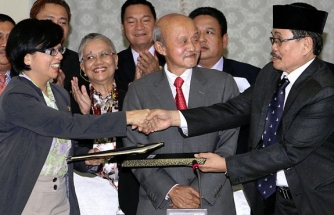