Visiting the Cokek plateau to wish the victims a speedy recovery, Lekesiz stated a huge landslide happened in the region on Thursday night. 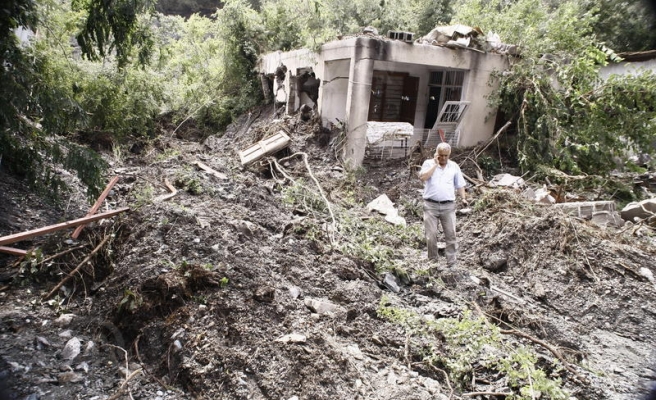 Governor of Turkey's southern Hatay province Mehmet Celalettin Lekesiz stated on Friday that  121 kilograms rain fell per square meter in 7 hours, regarding the heavy flood and landslides, which left 5 dead and 12 wounded.

Visiting the Cokek plateau to wish the victims a speedy recovery, Lekesiz stated a huge landslide happened in the region on Thursday night.

"A real damage exists here. Our ministers have called and our deputy prime minister sent his wishes for speedy recovery. They stated they would do all, what is needed to be done. Since the incident occured, all our institutions have acted together. We can get better together but it's impossible to bring back the dead. More people could have died but as the people were awake at 4 a.m., heard the noise of the landslide and discharged their homes, a bigger disaster was prevented," Lekesiz said.

Five people were killed, 12 others wounded and 6 houses were demolished in the flood on Thursday night, Office of Governor of Hatay had stated.

In case of the possibility that there could be missing people, a search and rescue helicopter of General Staff as well as an ambulance helicopter of Health Ministry were sent to the region, according to the Prime Ministry Disaster and Emergency Management Presidency (AFAD).

An ambulance helicopter of Turkish Ministry of Health rescued 3 people, while 6 others were rescued by a helicopter of General Staff.