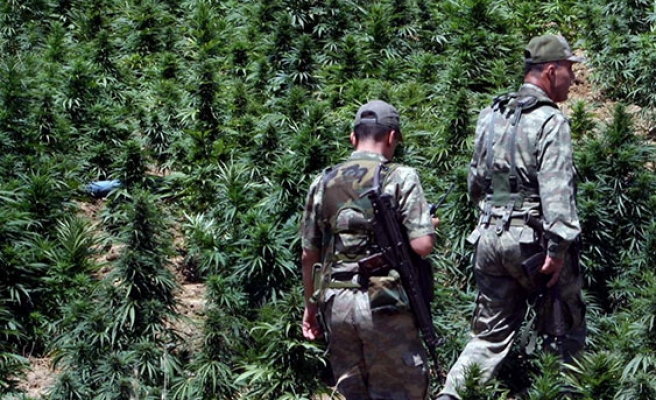 In an anti-narcoterrorism operation on Tuesday, security forces supported by helicopters seized 3 tons of hashish and 15 million marijuana plants sown over 1,000 acres in the southeastern province of Diyarbakır's Lice district.

The hashish was hidden in a field. The security forces destroyed the hashish and the marijuana plants.

During the operation, security personnel found that drug dealers had installed pipes for a working drip irrigation system for the first time.

Turkish security forces struck hard at one of the main sources of revenue for the Kurdistan Workers' Party's (PKK) -- drug trafficking -- with operations carried out in southeastern Turkey over the past six months. Since January, more than 36 million cannabis roots valued at up to TL 4 billion and 2,930 kilograms of heroin with a value of TL 200 million have been seized by the security forces.

The cannabis, which was planted over thousands of acres, was collected and destroyed in operations jointly carried out by the gendarmerie, police and village guards.

Other types of plants used to manufacture drugs that were found in the fields were also seized, costing the growers millions of lira in their eventual value.

Turkey has for a long time focused solely on the security side of the conflict with the PKK, ignoring, for the most part, the subsidiary efforts or branches of the PKK's criminal activities.

Currently, the most impacted parts of the Southeast serve as “safe havens” for marijuana growers, as well as for traffickers of synthetic narcotics.

There is historical background to the story that has paved the way for the PKK to plant fields of drugs. As part of the Law of Emergency (OHAL) that was in place in most eastern and southeastern provinces well into the early 2000s, hundreds of villages were evacuated by the state, with displaced people being relocated to cities in the west. It was after these departures that the plantations started and PKK involvement in illegal drug growing increased. With the villages empty and security forces no longer visiting rural areas, many districts succumbed to PKK demands to plant drugs. The PKK offered protection to the producers.

According to a 2012 report of the European Monitoring Center for Drugs and Drug Addiction (EMCDDA), 53 percent of the seizures of heroin all across the world take place in Turkey and Iran.