"Around 45,000 Syrian Kurds have crossed the border as of now from eight entrance points along a 30-km distance from Akcakale to Mursitpinar since we opened the border yesterday," Turkish Deputy Prime Minister Numan Kurtulmus said. 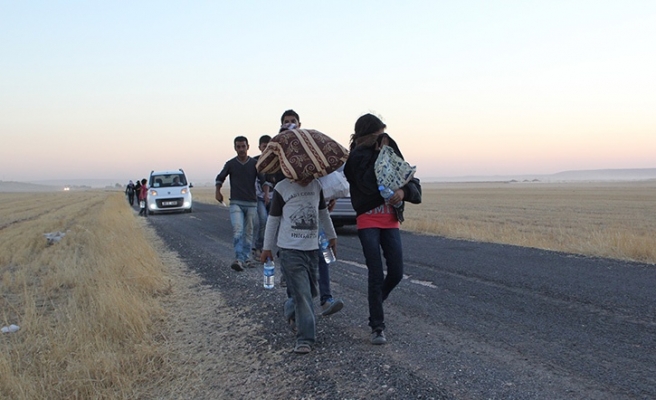 Tens of thousands of Syrian Kurds have crossed into Turkey over the past day, fleeing an advance by ISIL fighters who have seized dozens of villages close to the border, Turkish Deputy Prime Minister Numan Kurtulmus said on Saturday.

Turkey opened a stretch of the frontier on Friday after Kurdish civilians fled their homes, fearing an imminent attack on the border town of Ayn al-Arab, known as Kobani in Kurdish.

"Around 45,000 Syrian Kurds have crossed the border as of now from eight entrance points along a 30-km distance from Akcakale to Mursitpinar since we opened the border yesterday," Kurtulmus told CNN Turk television.

Kurtulmus told reporters in Ankara on Saturday: "Turkey had been ready for an even worse-case scenario: a flow of up to 100,000 people."

He added: "In no other place in the world, no country, regardless how good their economic conditions are, could accommodate some 45,000 refugees at one time. This shows the strength and good intentions of Turkey."

ISIL's advances in northern Syria have prompted calls for help by the region's Kurds who fear an impending massacre in the town of Kobani, which sits in a strategic position close to the Turkish border.

At least 18 ISIL fighters were killed in clashes with Syrian Kurds overnight as the militant group took control of more villages around the town, according to the Syrian Observatory for Human Rights, which monitors the war.