Bangladeshi diplomat calls for help from int'l community on Rohingya

"Bangladesh cannot do it alone, the international community, for example Turkey as a leading Muslim country should come forward," Bangladeshi ambassador in Ankara said. 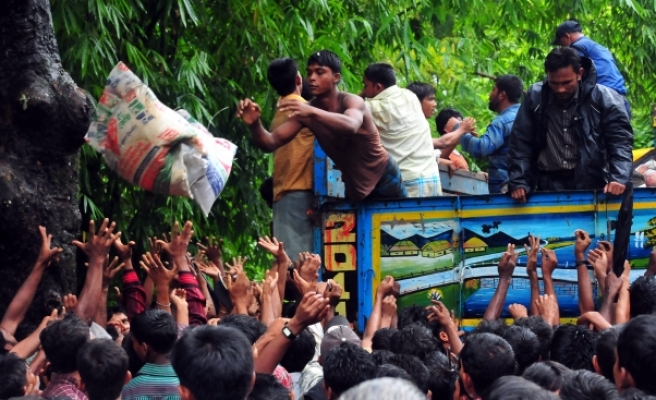 The senior Bangladeshi diplomat in Turkey has said the international community, with Turkey as a leading Muslim figure, should step forward to put an end to the violence against Rohingya Muslims in Myanmar's Arakan state.

"The international community, I mean Muslim countries and Western countries who can afford, should come forward", Bangladeshi ambassador in Ankara Zulfiqur Rahman told AA in an exclusive interview.

"Bangladesh cannot do it alone, the international community, for example Turkey as a leading Muslim country should come forward," he said.

Rahman noted that Bangladesh had been facing the Rohingya Muslims issue for decades.

He said there had been two major migration flows from Arakan to Bangladesh in 1978 and 1991, as nearly 450,000 people had sought shelter in Bangladeshi territory.

The ambassador noted that most of these refugees had been sent back after talks between governments of Bangladesh and Myanmar, but in 2005 the Myanmar side had stopped the repatriation process.

"We have two camps in Bangladesh and there are about 30,000 people still living there," he said, adding that there were about half a million Rohingya people who currently lived in Bangladesh as undocumented workers.
"We are actually in a big trouble. Because, we have been hosting these people on and off for the last 30 years and it is costing us huge," Rahman stated.

The ambassador said the Bangladeshi government had decided that it could not take it anymore without international assistance.

"The international community is not coming forward, is not talking to the Myanmar government to find a permanent solution. This is an ethnic issue in Myanmar. Why people are fleeing their country- Nobody wants to leave their home. That's not their choice, they are forced to do that. So, international community should work with the Myanmar government to address that issue," he said.

Commenting on the latest incidents in Arakan, Rahman said this time Bangladesh told those trying to flee Myanmar not to cross the border, provided them with humanitarian aid on the river and sent them back.

"In principle, we decided that it is time for the international community to work with Myanmar, rather than with the government Bangladesh. Because, we cannot do anything to improve the situation in Myanmar," he said.

Rahman said Bangladesh was a small country with a population of 160 million, "We cannot afford to take more people actually. That is pure and simple," he said.

"With all our sympathy for these Muslim people across our border who have some similarities with us in terms of religion and language, we think that it is the time the international community looks at the issue very seriously and take the steps so that these people can go back to their home country," Rahman noted.

The ambassador said Myanmar was now going through a transition process in terms of democratization and it was a good time to talk to the government of Myanmar to accept the Rohingya people as citizens and grant them rights.
"The international community should work with all the leaders in Myanmar and tell them 'These are your people and citizens, you have to take them as your citizens'," he said.

Rahman also said the official process between Bangladesh and Myanmar on the return of the Rohingya to Arakan had started, but it did not proceed well despite promises at highest level.

"We are in a very difficult situation. These are our Muslim population, we cannot ignore them, but also we cannot host them for indefinite future. There should be a solution and the only honorable solution is that they should be able to go back to their home with honor and dignity, and giving them all the rights," the ambassador said.