Lake Burdur, once a large lake between the provinces of Burdur and Isparta in southwestern Turkey is now vanishing rapidly 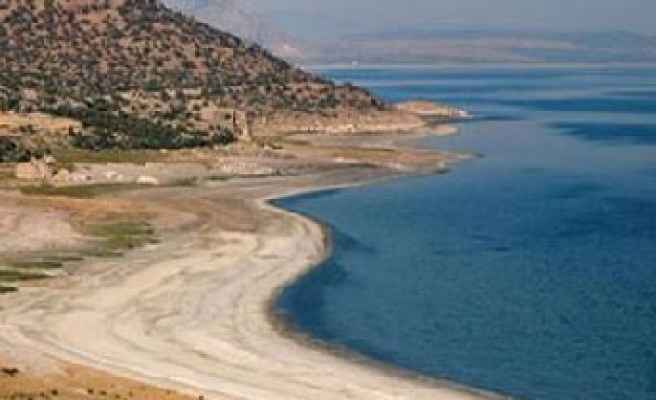 Environmentalists are calling on the public and the authorities to increase their efforts to protect Lake Burdur, once a large lake between the provinces of Burdur and Isparta in southwestern Turkey that is now vanishing rapidly, to the shock and sadness of nature lovers. “Lake Burdur, home to 1,000,000 species of flora and fauna, is facing the risk of disappearance in 20 years. It is drying up like a house on fire,” said Şafak Türkel, a producer of a multifaceted project called “Lament for the Lake,” (“Göle Yas” in Turkish) at a press conference held on the shore of Lake Burdur late Wednesday.

In addition to urging people to be aware of the risk of losing the lake forever as well as the challenges of climate change and harsh transformations to the natural environment that are expected, Türkel says the project and the story of the lake is also his own story. It is the story of a man born in a nearby neighborhood who can't bear to see the lake that shaped his childhood disappearing in front of his eyes.

“'Lament for the Lake' is a journey through my childhood memories. In my hometown of Burdur, old women sang laments of sorrow [Yas in Turkish] for those who had passed away. This time, those songs of mourning are for the lake, rather than for the death of their loved ones. The lake has been drying out for a long time and probably is going to shrink and wither completely soon, just like most of those women,” Türkel said.

A dervish that carries the pain of the lake

“Songs for the Lake” is a film that is one element of the project. Türkel noted “a very important point of the film” is a dervish who is turning around in harmony with everything in this world and simultaneously feeling the lake's cries in his heart. By turning for the whole year, he tries to stop time and delay the death of the lake.

Ziya Azazi, a Vienna-based dancer who will perform the role of dervish, called for urgent precautions to be taken. He noted the importance of saving the lake; the death of Lake Burdur, its aquatic life and all the related memories of days spent at the lake will leave the residents of Burdur with a lasting wound.

Apart from the loss of the natural life within and around the lake and a place of pleasant memories, in the long run, a whole culture will be wiped out, Eray Mert, director of the film, said. “There is no substitution of cultures. Once lost, they do not come back again. Their loss often goes unnoticed, which is the most painful thing. However we, a few documentary filmmakers, realize this and we vow to make large numbers of people aware of it,” Mert noted.

“Lament for the Lake” is an artistic and environmental project consisting of three parallel elements: “Life for the Lake," an international social media campaign and public relations outreach effort; “Songs for the Lake,” a documentary film and the Lake Burdur Festival, an environmental, arts and water sports festival to be held at Lake Burdur. Through these projects, the environmentalists are hoping to increase public awareness and to establish a stronger connection between the lake and the people living around it.

“No one shows any interest in Lake Burdur anymore; it is forgotten,” said Mustafa Saatci, rector of Mehmet Akif Ersoy University in Burdur, one of the many national partners in the project, at the press conference. He noted that in the old days, you couldn't see the edge of the lake; however, now the waterline has receded and the lakeshore is quite visible. The lake has become considerably smaller in the past few years. “If we turn our back on the lake and don't pay attention, we will forget it and have no idea about what is going on with the lake.”

The environmentalists think there are two important problems that need to be resolved as quickly as possible. The volume of water in the lake is decreasing due to the inefficient use of water for agricultural purposes and more than 20 dams in the area around Lake Burdur hinder the water supply to the lake.

Beginning in December of this year, the supporters of the year-long project hope to reverse the indifference and inattention to the current situation and to keep Lake Burdur alive, preserving the natural and cultural heritage of Burdur province.