Judges examining the MGK achieves found no trace of the materials from a presentation delivered during the meeting by Gen. Fevzi Türkeri, who was the head of the security department of the General Staff at the time. 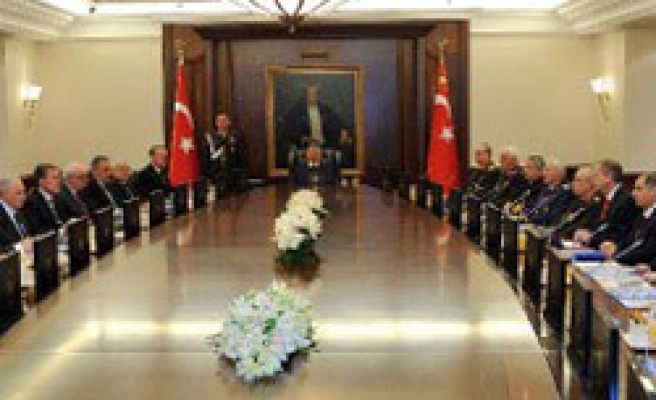 The lawyer of one of the co-plaintiffs in the ongoing trial into the Feb. 28, 1997 military coup has asked an Ankara court to request the records of a presentation given during a controversial National Security Council (MGK) meeting on Feb. 28, 1997, which resulted in the forced resignation of a coalition government led by a now-defunct religious-minded party, from the General Staff after judges have been unable to find them in the MGK archives.

Lawyer Müşir Karaduman on Friday launched a criminal complaint against the MGK at the Ankara 13th High Criminal Court, which is hearing the Feb.28 trial, on the grounds that the MGK is hiding evidence from the court.

Judges examining the MGK achieves found no trace of the materials from a presentation delivered during the meeting by Gen. Fevzi Türkeri, who was the head of the security department of the General Staff at the time.

In his petition, Karaduman called on the court to request the logs of the presentation from the General Staff.

The Feb. 28 trial continued on Friday with the defense statement of retired Maj. Gen. Muhittin Erdal Şenel, a jailed suspect in the trial, who was a legal adviser to the chief of the General Staff at the time of the coup.

Şenel said he never overstepped the boundaries of his job and never allowed others to do so during his service in the military.

Noting that he was tied to the chief of the General staff, Şenel said it was impossible for the army chief to give him orders as part of the West Study Group (BÇG), a clandestine group formed within the military in order to contribute to the staging of the planned coup.

Şenel also said he never saw a document dated April 4, 1997 detailing the establishment of the BÇG.

“In the document, there is no signature or contribution of mine. The document was signed by the secretariat-general of the General Staff,” he said, adding that he did not participate in any of the meetings held by the BÇG.

The retired general added that he was kept in jail despite the absence of strong evidence showing him involvement in force or violence to topple the Refah-Yol coalition government -- made up of the Welfare Party (RP) and the True Path Party (DYP).

“The most definite source to understand whether Feb. 28 was a coup is the speeches of the military members at the MGK meeting,” he said.

Kazan's statements came at a news conference at the SP headquarters.

With regards to the content of the MGK logs, which have been covered by the press, Kazan said they show then Prime Minister Necmettin Erbakan resisted the military and tried hard to prevent the coup.

Kazan also said the MGK logs that have been sent to the Ankara court are just a summary of the logs and not all of them.

“If only all the logs could have been read. We are talking about a MGK meeting which lasted for 10 hours. Five hours of this meeting did not take place without a word, everyone spoke,” he said.