Flash flooding caused by torrential rains killed eight people, including at least four children, in the Black Sea province of Samsun on Wednesday. 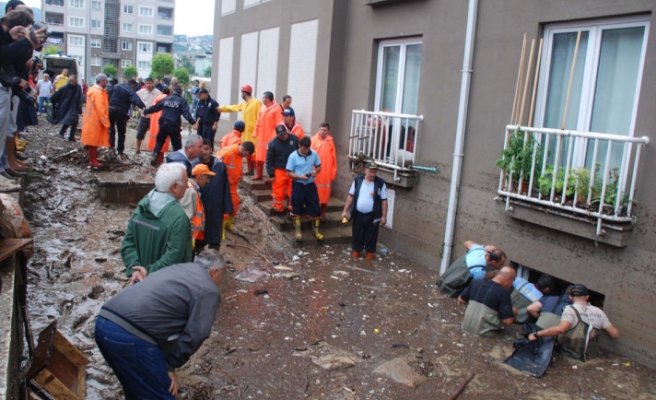 Flash flooding caused by torrential rains killed eight people, including at least four children, in the Black Sea province of Samsun on Wednesday.

The downpour caused a river to overflow late on Tuesday, inundating nearby homes and shops and stranding cars in the Canik district of Samsun. Blocks of flats built by the Housing Development Administration of Turkey (TOKİ) were greatly affected by the deluge and many of buildings' ground and first floors were flooded.

Search and rescue teams found the bodies of two young boys, aged 1 and 5, as well as a man and his two sons, aged 9 and 16, while searching the TOKİ complex. Samsun Governor Hüseyin Aksoy said an unidentified woman also drowned on the ground floor of one of the buildings and added that 21 people have been injured. Samsun Mayor Yusuf Ziya Yılmaz was also at the scene of incident to observe rescue operations.

The Samsun-Ordu road in Canik district was closed off to traffic for a few hours as a precaution against the possibility of a landslide. The road was opened to traffic later in the morning.