Erdogan: 'No uncertainties' ahead of presidential vote

Turkish PM Recep Tayyip Erdogan said his government would not let any political or economic uncertainty affect the country as it prepares for a historic poll in August. 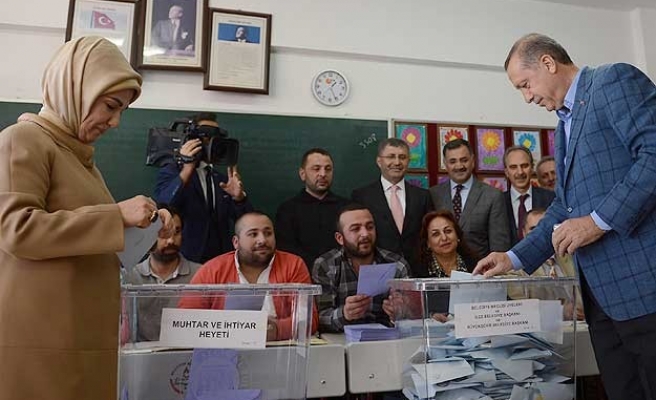 Turkish Prime Minister Recep Tayyip Erdogan said on Wednesday that the government wouldn't let any political or economic uncertainty to affect Turkey ahead of the presidential election slated for August.

In his ‘address to the nation’ on TV, Erdogan said consultations were continuing for his ruling AK Party’s presidential candidate.

He said the government would strive for peaceful polls as citizens vote to elect a president for the first time in the history of the Turkish Republic.

"I believe Turkey will emerge stronger out of the presidential election and close to the 2023 goals. We would not let any political or economic uncertainties to rock Turkey both prior to and after the election," he said.

Erdogan said the Turkish state was facing an organization trying to topple the government, referring to the Gulen movement led by U.S.-based scholar Fethullah Gulen.

"Following the Gezi Park protests, the target of 17 and 25 December coup attempt was to weaken and depose the government. They targeted the peace atmosphere, wanted to collapse the economy, to sweep away all advances and slow down the stability and development of Turkey by inciting the youth to go out into the streets via social media and provoking violence in the country," Erdogan said.

Turkey has initiated a legal process to investigate Gulen, in a move that might possibly lead to a request by the Turkish government for his extradition from the U.S.

The prime minister also celebrated the May Day of all workers called for celebrations to be free of violence.

"We hope the May Day would be celebrated as a festival of democracy, solidarity and peace, without resorting to violence, vandalism and conflict," Erdogan said.

He said his government wanted to remove a negative image associated with the May Day. Erdogan’s government declared May 1st a public holiday in 2009.