Turkish President Recep Tayyip Erdogan told the World Economic Forum that the international community should push for democratic systems in both Syria and Iraq. 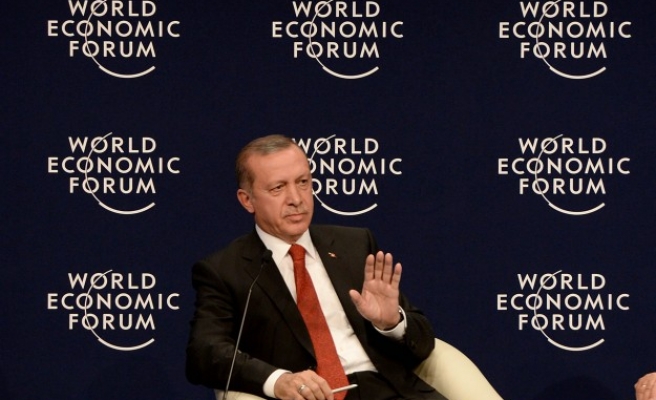 irstrikes in Syria and Iraq by a U.S.-led international coalition will not permanently end terrorism, and the international community should be more active in establishing democracy in these countries, Turkish President Recep Tayyip Erdogan has said.

In a wide-ranging speech at the World Economic Forum in Istanbul on Sunday, Erdogan said: "The aerial bombardments only provide a temporary solution."

Regarding Turkey's contribution to the international coalition in its fight against extremist ISIL militants, Erdogan stated that: "Turkey will take its place where it ought to be."

It has posted graphic online videos of mass executions, as well as the beheadings of Western hostages.

Stating that the international community should track the weapons it supplies to Iraq and Syria, Erdogan asked: "Germany is sending weapons to the peshmerga [northern Iraqi Kurdish troops], but to whom it is sending [these]?

“How can we know that these weapons will not be captured by ISIL, or al-Qaeda?"

Criticizing the U.K.’s decision to join the U.S.-led strikes on ISIL targets inside Iraq, Erdogan said: "The U.K. decided to take action only in Iraq. ‘Only in Syria’, or ‘only in Iraq’ -- this is not viable. We should realize a common orientation towards both."

The U.K. has been supplying arms to Iraqi Kurds and conducting aerial surveillance operations. On Friday, British lawmakers approved a motion which would see the country join in the U.S.-led coalition's airstrikes in Iraq against ISIL.

Claiming that international terrorism has been boosted by inaction towards the Syrian regime, Erdogan said: "Establishing a representative parliamentary system is something that should not be further delayed in Syria. And reforms to have an all-embracing government in Iraq should be urgently realized."

"ISIL was born in Iraq and passed into Syria during the crisis. It strengthened itself in Syria and then again returned to Iraq. Now it controls some one-third of Iraq," Erdogan said, referring to the late response of the international community to the almost four-year humanitarian crisis in Syria.

Erdogan repeated that Turkey pays great importance to the establishment of a no-fly zone in Syria and building up safe zones on the Syrian side of the border as a humanitarian response.

Turkey has requested a Syria no-fly zone from the United Nations since 2012, but the international community has yet to support this call.

More than 150,000 Syrian Kurds passed into Turkish territory since ISIL attacks on the Kurdish town of Kobani last week. Turkey already is home to some 1.3 million Syrian refugees.

Erdogan also criticized the international community for their "indifference" towards the Syrian refugee flows in neighboring countries.

"Including the aid from the U.N. refugee agency, we got some $150 million up to now from the international community. On the other hand, the number we paid alone for Syrian refugees has reached $4.5 billion," Erdogan said.

Erdogan also strongly criticized the structure of the U.N. given the strong decision-making capabilities of the five permanent members of the U.N. Security Council.

"The world is bigger than five. The fate of a country should not be in the hands of either the U.S., France, Russia, China or the U.K.," Erdogan said.

Russia, the staunchest ally of the Bashar al-Assad regime in Syria, and China, have several times used their veto power against draft proposals that sought military sanctions on the Damascus government if it continued to commit violence.

"We have to fight against all terror organizations in the region," Turkish President Recep Tayyip Erdogan said on Sunday.

The Turkish head-of-state was attending a meeting of the Turkish Exporters’ Assembly in Istanbul where he unveiled the country's new export branding.

Erdogan pointed to Turkey hosting over 1.5 million refugees escaping from violence in their countries.

"Terror is not only in neighboring countries," he said "We have terror as well... But we are patient and calm. We will succeed [in the solution process] despite all the sabotage."

Erdogan said Turkey would not give in to any acts of blackmail in the solution process and that no one could harm the brotherhood between Turkish and Kurdish people.

The country's ‘solution process,’ which began early last year, is aimed at securing ending a more than 30 year-old conflict Turkish armed forces and the outlawed Kurdistan Workers’ Party, which is listed as a terrorist group by Turkey as well as by the U.S. and the European Union.