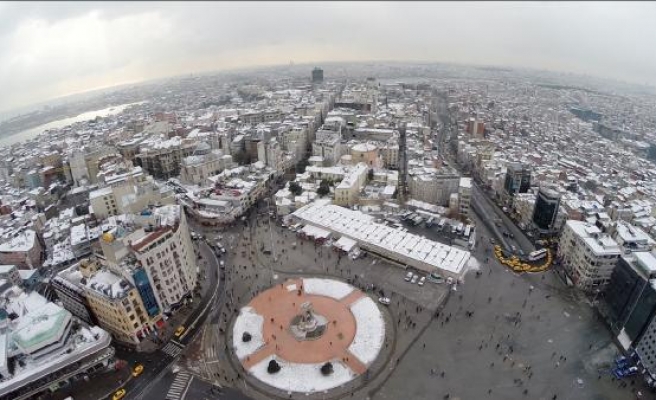 World Bulletin / News Desk
Turkey’s biggest province – and major international aviation hub – has been hit by heavy snowfall, leading to the short-term cancellation of all flights in and out of Istanbul Ataturk International Airport.

Earlier on Wednesday a Turkish Airlines flight at Ataturk Airport skidded into a snowdrift while taxiing amid the driving snow and winds which have hit the province over the last 48 hours.

Flight TK829 from Beirut became stuck in snow after landing. No injuries were reported.

The extreme weather – which particularly hit the province’s European side and Bosporus areas – led Turkish Airlines to cancel 334 domestic and international flights (Wednesday and Thursday).

Province Governor Vasip Sahin has warned Istanbulites not to go outside unless necessary.

Istanbul Mayor Kadir Topbas said that almost 460 homeless people had been given shelter in sports halls and that 15,000 tons of salt had been used to keep roads clear.

Turkey’s National General Meteorology Directorate had predicted on Tuesday that snowfall would stop on Thursday midday local time but that it would start snowing again that night until Friday morning.

According to the meteorology agency, snowfall measured 25-40 centimeters in Istanbul’s Catalca and Hadimkoy districts while 10 centimeters fell in Beylikduzu, Basaksehir and Esenyurt.