Fast breaking dinner given to Syrians in Turkey's Malatya

The Governor of Malatya, Vasip Sahin, expressed his happiness at meeting the Syrian guests of his city. 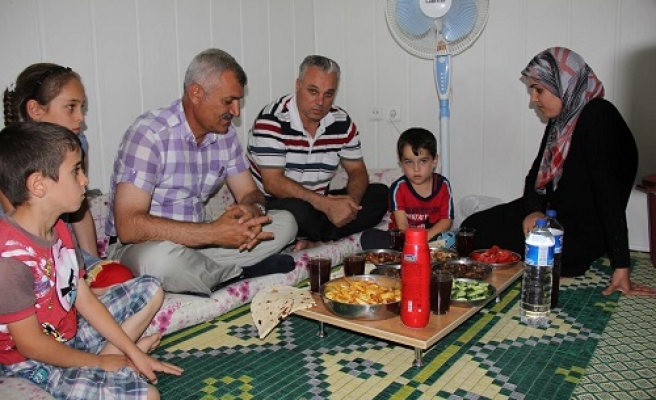 As the civil war in Syria lingers, Syrian refugees, or like Turkish bureaucrats call them, "guests", continue to their lives in the camps in several Turkish cities. One of them is Malatya where thousands of Syrians settle in a container camp.

In order to share their sufferings and cement the friendship, a fast-breaking dinner was organized for 4,000 Syrian refugees with the collaboration of the Malatya provincial governorship, Malatya municipality, Inonu University and many NGO's.

The Governor of Malatya, Vasip Sahin, expressed his happiness at meeting the Syrian guests of his city as they did last Ramadan. Unlike the event last year, this year they preferred to hold the event in the container camp, said the governor, adding "I hope our brothers and sisters living here will go back home as soon as possible."

Voicing his admiration about Syrians' kindness, governor Sahin noted "They indicate their gratefulness on every opportunity. Our Syrian guests are also very sensitive not to ruin the peace and stability in our city. I appreciate them."

The highest commander in the province General Galip Mendi, deputy governors, senior officials and representatives of NGO's attended the event.