Firefighting teams are attempting to contain a blaze in Hatay province that has destroyed some 1000 hectares of forestland so far, initial reports have said. 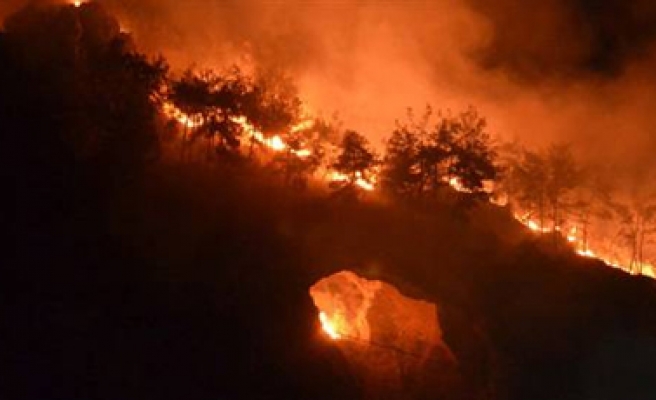 Firefighting teams are attempting to contain a blaze in Hatay province that has destroyed some 1000 hectares of forestland so far, initial reports have said.

Fire brigades were deployed to the forest near the villages of Gülderen, Oğlakören and Dikmece in the district of Karlısu, but the firefighting teams were unsuccessful in bringing the flames under control. Despite the efforts by firefighters, 30 square kilometers of forested area are still ablaze, said Hatay Governor Celalettin Lekesiz, who is also in the area.

Firefighting teams from the Hatay Regional Forestry Directorate as well as from Kahramanmaraş, Osmaniye and Gaziantep provinces worked all day long on Monday to contain the fire in Karlısu. The teams had to slow their efforts at night but sped up again early on Tuesday morning. More than 100 firefighters, almost 300 local volunteers, 10 fire trucks, six firefighting helicopters and two firefighting planes are still working to completely contain the fire.

Meanwhile another fire erupted on Monday morning in the Alanya district of Antalya province. The reason for the fire is still unknown. Twenty-five hectares of forestland were affected by the fire, officials said. The firefighting teams managed to extinguish the fire on Monday evening.

In the Turgutlu district in the western province of Manisa, another fire broke out on Monday near the Akçapınar and Gökkaya neighborhoods due to known causes. The fire, which damaged more than 50 hectares of forestland, was contained by Turgutlu municipal firefighters. Firefighting teams worked alongside locals to bring the fire under control. An investigation has been launched into the cause of the fire. Firefighting teams are still working to cool the land affected.

No deaths or injuries were reported from the fires.