German and French nationals, who played a role in the violent Gezi park protests in 2013 were among five arrested for trying to aid and incite refugees against Turkish police 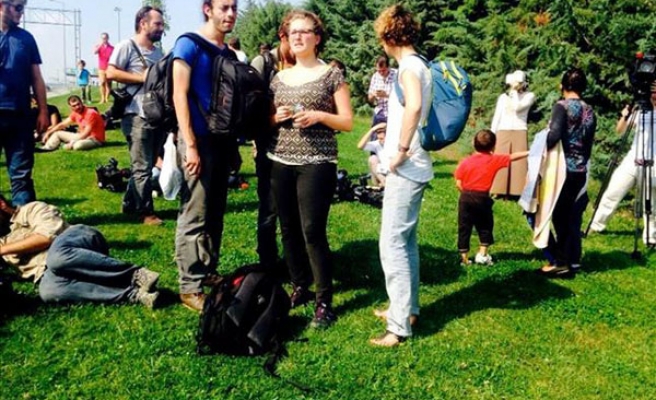 Five people, including a German and a French national, were arrested Monday in Istanbul for  andare accused of encouraging groups of refugees to set off on foot for Edirne, the border province route that makes way for Greece

The suspects are accused of aiding and abetting refugees in circumventing police restrictions on migrants heading for Edirne province, which borders Greece and Bulgaria.

Around 3,000 refugees have been waiting at Istanbul’s main bus station to travel to the province, where thousands are already seeking to enter the EU.

The suspects - identified as German national Nora S., French national Charlotte L. and Syrians Abdalsalam S., Ali F., and Mohammed F. - were said to have incited refugees against Turkish police and persuaded them against cooperating with the authorities.

They are accused of encouraging groups of refugees to set off on foot for Edirne.

Earlier Monday, police intercepted a 500-strong group of Syrian refugees walking along a highway near Istanbul towards the province.

More than 1,500 refugees have been waiting in Edirne province for 10 days to cross the border.

Millions of Syrians have fled their country since war broke out in 2011 and Turkey is now home to the world’s largest refugee population, including 1.9 million Syrians.

It is alleged that Nora S. and Charlotte L. played a role in the 2013 Gezi Park anti-government protests.