Mehmet Kilic was one of the peace monitors seized in eastern Ukraine and held for 32 days. 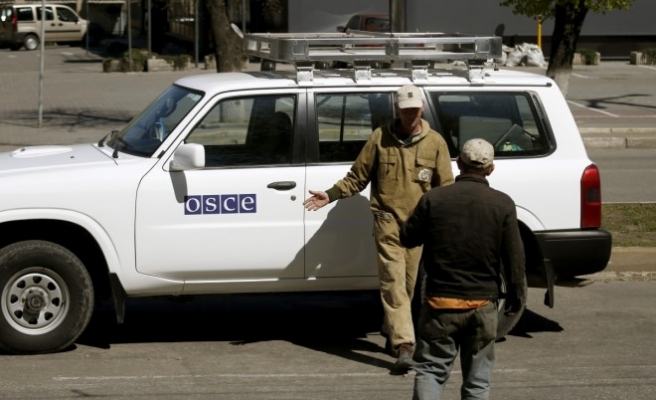 The Turkish peace observer held by pro-Russian separatists in eastern Ukraine for 32 days on Wednesday said he would return to the country for another mission.

Mehmet Kilic, 35, said: "It is like driving a car. There is always a chance of having accidents. But that does not prevent you from hitting the roads again."

He was seized along with three fellow monitors from the Organization for Security and Co-operation in Europe, known as OSCE, in Donetsk on May 26. He was released Friday.

Referring to previous hostage-taking by rebels fighting government troops in the eastern districts of Donetsk and Luhansk, he said: "The previous observers that went there before us were taken as hostages too, but only for eight days. They were individuals sent by their countries. We were there as international monitors approved by 57 countries and had immunity."

Kilic and his colleagues from Switzerland, Estonia and Denmark were sent to Ukraine in late April as part of team of 100 to monitor the agreement aimed at calming the conflict.

Speaking to the Anadolu Agency on Tuesday, he described their captors as Cossacks, known for their strong Russian nationalism, but said his group was treated well and his Muslim dietary habits were respected.

The hardest part of being imprisoned was that his family did not know what had happened to him, he explained.

"You know that you are healthy, but your family does not know it. It was a tough psychological process for us, but thanks to our Foreign Ministry I am now with my family."

Talking about preparing for the mission in April, Kilic said he was "psychologically ready" but never imagined either side in the conflict would seize peace monitors from an impartial international body.

"We are there to bring peace," he said. "Every party in that region needs us."

He said the hostages were certain that the Turkish government's initiatives to secure their release would be successful. "They were almost sure that if no other solutions were left, Turkey would just hold an operation in the area and save us," Kilic said. "Turkey was the country to be effective in our release."

The OSCE has 57 participating states from Europe, Central Asia and North America. It works to build democracy, ensure human rights and the rule of law, and promote tolerance and equality.

Turkey's Foreign Minister Ahmet Davutoglu and Ertugrul Apakan, chief monitor of the OSCE mission to Ukraine, were central to the long diplomatic process to secure the observers release.